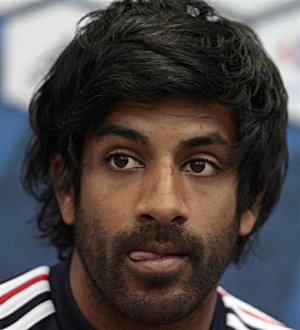 Two days ago, Vikash Dhorasoo announced that he was retiring from football.

He started playing at Le Havre AC, then spent a few years at Olympique Lyonnais (where he won two French championship medals) and even played for Milan AC (he was on the bench during that most dramatic Champions League final ever…). He was a member of the French national team and played during the 2006 World Cup.

Incidentally, he arrived at Lyon when Christina and I were studying there. We went to watch his first match ever for the club against Atletico Madrid and he was excellent. We even went to the same cinema once except that he was waiting in another queue and we did not have the courage to go and talk to him… Talking of cinema, Vikash Dhorasoo will also always be known as the football player who directed a film.

He played for the Mauritian team once during an exhibition match against Marseille and he was the best player by far.

He is without doubt the best footballer born of Mauritian parents ever. He played with Zinedine Zidane and Paolo Maldini against the likes of Steven Gerrard and Djibril Cissé. I wonder if we’ll ever have another as successful footballer as Vikash given the state of football in Mauritius…

I wish him good luck for the future.