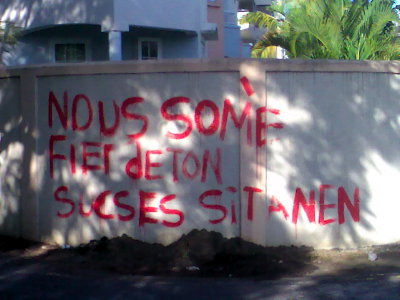 Found this in Quatre-Bornes while driving to work today… Where do I begin?

First, this is an eyesore. It hurts my senses so much that I felt compelled to get off my car, take a photo and blog on it.

Secondly, the one who has written this is an illiterate. Come on. “Nous Somè Fier Deton Sucses Sitanen”. He (must be a he!) cannot even get Sithanen right! Stupid guy!

Thirdly, what is the objective of that message? If the perpetrator thinks that this message will flatter Sithanen then he is wrong. This kind of stupid message can only tarnish the image of Sithanen according to me as it makes me associate the current Minister of Finance with a bunch of illiterate painters… and nothing more. 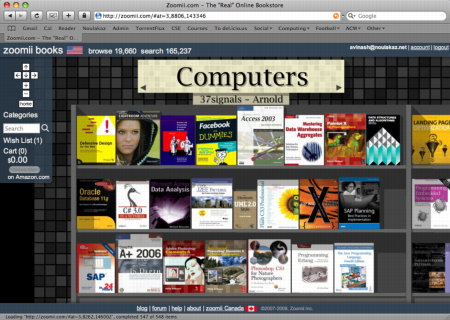 I’ve just discovered Zoomii, the “real” online bookstore, and I can say that I’m fascinated. Zoomii allows you to browse the Amazon book collection like in a real bookstore i.e. “physically” classified by category on different shelves. Clicking on a cover pops up an ajaxified window with detailed information on the book (as provided by Amazon.)

The beauty of Zoomii is that it is just a novel frontend to Amazon. When you click on the “Checkout” button, the actual credit-card transaction takes places on Amazon’s website. According to me, this is the killer feature that will drive the masses to Zoomii.

One issue is that the Zoomii cart is not the same as the Amazon cart. More precisely, adding a book using Zoomii does not populate your normal Amazon cart. Rather, it adds the book to a special Zoomii cart which has to be paid separately. Try clicking on “Checkout” and you’ll understand.

For the more technically oriented, Zoomii uses Linux and Java on the backend and Javascript in the browser. It also uses Amazon S3 (for data storage) and Amazon EC2 (for all image processing I guess.)

Zoomii is in my opinion the kind of web application we’ll all take for granted in 2-3 years. I really need to get into that kind of thing before I’m labelled as being completely outdated. What is positive though is that Zoomii has been built by one person only, Chris Thiessen. There is some hope.

To be complete, I have to say that Zoomii makes its money through the Amazon Associates program. Each time one buys a book through Zoomii, Chris gets some money. Personally, I have no problem whatsoever with this economic model. In fact, this is also something that we all need to become accustomed to because this is how the (financial) world will work in the future. 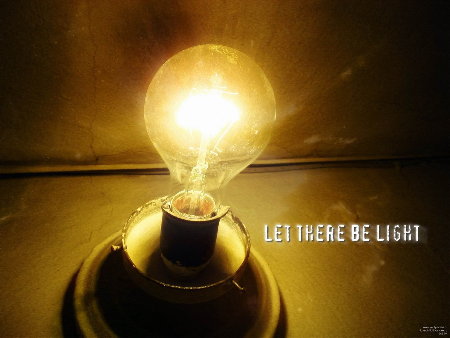 Like most (technology-oriented) parents, Christina and I have recorded hours and hours of Digital Video (DV) of Anya and Kyan growing and we’re still doing it now.

Digital Video (DV) requires a lot of space (of the order of 15Gb per hour!) Consequently, we edited the raw footage like mad and discarded all the crap to come up with beautiful movies (for us at least — I guess that most of you will fall asleep if you were ever subjected to them…)

Initially we only had one way to archive the movies: on VCD (No! Not DVD!) The reason is that we didn’t have DVD burners then. Of course, the quality is not great (MPEG-1 / 352×288 / 1150 kbit/s) but we personally do not care. Watching Anya discovering the world for the first time is what is important!

Then we acquired a DVD burner and shortly after we were producing our own DVDs. The quality level rose abruptly (MPEG-2 / 720×576 / around 2500 kbit/s) and we did that for years until H264 came.

H264 is the new MPEG-4 Part 10 video compression standard which has become pervasive since its adoption by Apple, Sony, Nokia and the Blu-ray Disc Association. Consequently, this year, Christina and I stopped creating DVDs and started rendering our movies to H264 at 720×576 and 1500 kbit/s.

Two weeks ago, Christina and I decided that having VCDs, DVDs and H264 Quicktime movies on my MacBook was going to hurt us in the long run. I did a little bit of investigation and realized that we had to convert all our VCDs and DVDs to H264. We settled on using HandBrake to do the conversion because, well, it’s excellent and open source.

As we are planning to buy an AppleTV some day, I used the AppleTV preset in HandBrake with the following changes:

Christina and I are now the proud owners of 48 home made H264 movies taking 17Gb of space (more than 24 hours.)

I have been looking at Amazon S3 for some time now as a means to keep my most important files in a data-center somewhere. And those 48 movies certainly qualify as my most important files ever! Unfortunately, sending 17Gb of data to Amazon from Mauritius is not practical (and this is one of the most massive understatements I’ve ever made) due to the pathetic bandwidth we have here.

Let’s see, at 128 kbit/s, 13 days would be required to upload all the 17Gb of video. Maybe it’s more sensible paying an air ticket to Réunion Island and doing it from there… Anyway, the cost to keep the data on Amazon S3 would then be:

This is extremely cheap! One added benefit is that the videos will all be accessible online. Surely, Kyan and Anya will be able to stream the movies from S3 to their mobile phones when they’ll be big enough to have phones :-)

Have you had the same problems? What strategy have you settled on for archiving your precious digital memories?

Thanks Microsoft... for cheap PCs

Lexpress.mu is not working well...