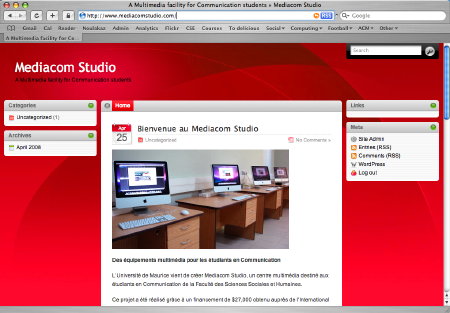 I am happy to announce that the Mediacom Studio website, www.mediacomstudio.com, has just been created by Christina and myself.

Mediacom Studio is a state-of-the-art audio and video production facility for Communication Studies students at the University of Mauritius. The studio will be fully operational for the 2008-2009 academic year. The studio has been funded by one agency of the UNESCO to promote the development of professional journalism in Mauritius.

The project was conceived by Christina and was approved by the UNESCO in 2007.

My contribution to the whole project was to help Christina select the equipment to acquire for the studio. This was a tough exercise as we were constrained by the budget and what equipment we could order in Mauritius. Nevertheless, we managed to come up with a very balanced and functionally rich list of equipment in my opinion:

Initially, the students will use iMovie ’08 for video editing. This is what I use at home and I find it excellent for beginners. We have also acquired one license of Final Cut Express for those students who want to use a more professional video editing software.

For viewing their creations, the students will be able to transfer their rendered files to an Apple TV connected to a Philips LCD TV. Additionally, they’ll be able to post their movies online on www.mediacomstudio.com for discerning people like you to enjoy… 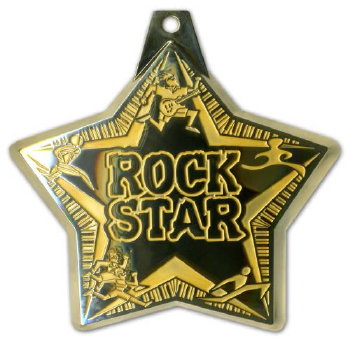 I have just come across a great article by Alex Iskold entitled Top 10 Traits of a Rockstar Software Engineer. It is a must read for all aspiring software engineers out there… especially those who are still learning the skills in a university.

The 10 traits he mentions are:

Phew! What can I say more? Apart from telling all of you to read the article thoroughly and to pay special attention to the various books he refers too. 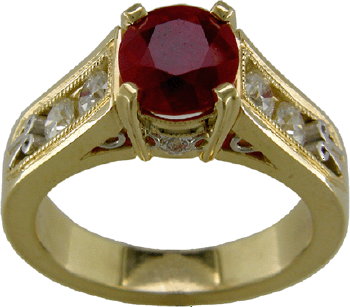 My Year II students are currently learning scripting with Ruby, my favorite programming language (ex aequo with Scheme I think…). Today I thought about what could be the difference between scripting and programming and I came up with:

Scripting is the same as programming except that you don’t have to worry about unnecessary details like deciding upon types, declaring classes and handling exceptional conditions. In other words, you only focus on the fundamentals.

Ruby is an excellent scripting language because it has been designed correctly. My students have had no problems understanding Ruby code that they were seeing for the first time. In fact, Ruby is a very elegant language.

Ruby is also very powerful thanks to the predefined functionalities in Ruby Core and the Ruby Standard Library. I have naturally spent some time explaining the likes of strings, regular expressions, etc. to my students but also libraries like OpenURI (used to access resources likes files, images and web services found on the Internet) and REXML (used to extract parts of an XML file.)

This simple Ruby script prompts the user for the name of an artist and queries Audioscrobbler for his/her top music tracks using OpenURI. The XML file returned is parsed using REXML and the top 10 tracks are displayed on screen. This is what I get when running it:

Not bad for a 20-lines long script! Incidentally, I deeply believe that Ruby is a great language to learn programming.

This is a great quote from one of my heroes, Mr Steve Yegge!

Ruby‘s one of the easiest languages for just about anyone to learn — it’s maybe a 3-day exercise, and after a week or so of using Ruby, you just may never look back. It’s like getting a new car: it still gets you from A to B, but without your old car’s flaky transmission, cracked windshield, and 5-year-old french-fry remnants under the driver’s seat.

Who am I to argue?

Day 2: Shatabdi Express to Kanpur and a real rickshaw