22 August 2008 Update II: Bruno Julie has earned a Bronze medal for all of us!

Bruno Julie lost on points against the Cuban. Even though I am completely ignorant of boxing techniques, I felt that Bruno Julie was tired at the end. The TV commentator suggested that the referee made a mistake but, frankly, I don’t have a clue…

The most important thing is that Bruno Julie is officially now the first ever Mauritian to earn a Bronze medal at the Olympics. It will be years (at least 4 more) before another Mauritian tries to equal this so this is a fantastic achievement. Congratulations to you, once more, Mr Bruno Julie!

My wife, my two kids and myself will be at the SSR International Airport to welcome Mr Bruno Julie to Mauritius! Who is coming?

Today, at 15:31, a lot of Mauritians will stop whatever they are doing and watch Bruno Julie’s fight against Yankiel Leon Alarcon of Cuba during the first semi-final of the 54Kg boxing competition at the 2008 Beijing Olypics.

Bruno Julie is already sure of winning a Bronze medal at least. And this is a first for our tiny country, Mauritius. I sincerely hope that Bruno Julie’s performance will make Mauritians realize the importance of preserving our unity and working towards the same goals and objectives. Allé Bruno! Allé Maurice!

18 August 2008 Update: The first ever Olympic medal for Mauritius!

Bruno Julie has won convincingly. Therefore, he is the first ever Mauritian to obtain an Olympic medal. He now is in the semi-final. Who knows what may happen next.

Thank you for giving us, fellow Mauritians, so much joy. And May The Force Be With You for the next fight!

Today is an historic day for our tiny country, Mauritius, as Bruno Julie, will fight in the men’s 54kg boxing quarterfinal in the Beijing 2008 Olympics at exactly 15:16. If he wins against Hector Manzanilla Rangel of Venezuela, he will be the first Mauritian ever to win an Olympic medal and he’ll be one of the few real heroes of our country.

Good luck, Mr Bruno Julie! May The Force Be With You! 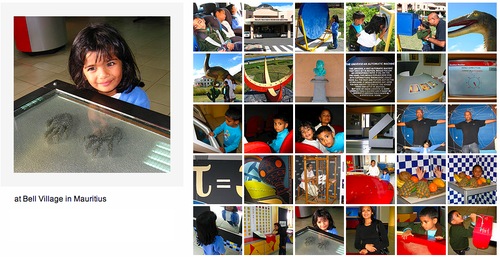 The Rajiv Gandhi Science Centre which is at Bell Village is one of the most well-kept secrets in Mauritius!

We went there two weeks ago with average expectations… We payed (I believe) Rs. 30 for a ticket. The first nice surprise was that there were a lot of things to experiment with in the yard. Things like using parabolas to transmit sound very efficiently (3rd picture) and lots of optical illusion experiments (4th and 5th pictures above.) As you can expect, the kids were having a lot of fun. And Christina and I were happy to answer all their questions.

Inside we got our second surprise: there were so many things to see (the story of the universe, the geological story of Mauritius, lots of background info on great scientists, etc.) and also so many things to experiment with (see the photos.) Anya, Kyan and their cousin, Chloé, were running everywhere trying out things and having a lot of fun! As a scientific, I was ecstatic. I couldn’t prevent myself wondering why some science classes (at primary and secondary levels) were not done there. I’m sure students would have understood a lot more.

I have to admit that there are some problems. Some of the experiments have stopped working and should be repaired. Applying fresh paint would not be a bad idea at all especially outside. But apart from those “details” which are so easy to remedy, the Rajiv Gandhi Science Centre is a great place to go to spend some hours and learn a lot at the same time.

Go there one day and I’m sure you’ll like it. We did.

(Click on the picture above or here for additional photos.)

iPhoto is an excellent Mac OS X application created by Apple which is used by countless amateurs (like yours truly) to manage their digital photo collection. Since the release of iPhoto ’08, a lot of people have wondered how to do an incremental backup of their library as this latest version of iPhoto keeps the library in a package (a special type of folder) instead of a plain folder and some backup applications have trouble with that. (An update: I tried doing the same thing with the latest HFS+-aware version of rsync 3.0 but I couldn’t do it as it seems to me that rsync does not copy all the metadata created by Mac OS X. Maybe I missed an option…)

This great backup software is normally used to backup a whole partition (i.e. my MacBook’s hard disk) to another partition (i.e. a partition on an external drive which can then be used to boot the MacBook.) I’ve just realized that it’s relatively straightforward to restrict the files to be backed up to a selection (i.e. your iPhoto library only…) and, instead of the destination being a partition, to choose a sparse image (i.e. a special file containing other files and which takes up only as much actual disk space as the data contained within.) 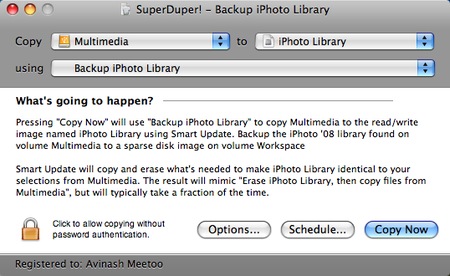 First of all, select the partition where the iPhoto ’08 library resides in ‘Copy’ (mine is Multimedia.) Then select where the sparse image will reside (I chose a folder on another disk.) Then you’ll have to create what SuperDuper! calls a copy script which will be used to indicate what to copy and what to ignore. To do that click on the drop down next to ‘using’ and choose ‘New Copy Script.’ 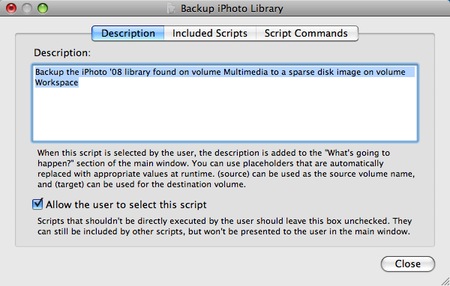 Write a nice description and make sure that the ‘Allow the user to select this script’ is ticked. 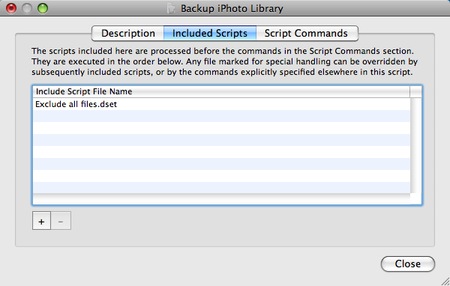 In the ‘Included Scripts’ tab, click on the ‘+’ and choose the predefined ‘Exclude all files’ script. This is to make sure that SuperDuper! only backups those files and folders that you’ll explicitly specify and ignore all the rest. This is essential. 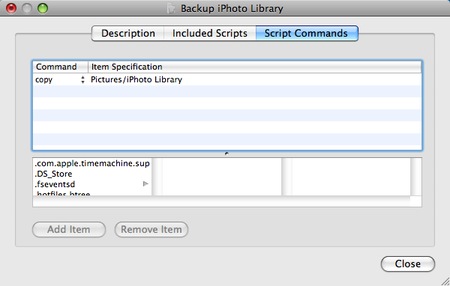 Then, in the ‘Script Commands’ tab, navigate to the folder where the iPhoto library is found and select it. Click on ‘Add Item’ and it will be added in the top part of the window. The default command is ‘ignore.’ Change that to ‘copy.’ As you can easily guess, this, combined with the ‘Exclude all files’ seen previously, will tell SuperDuper! to only consider the iPhoto library and nothing else which is what we want.

Click on ‘Close.’ and give a sensible name to the script (‘Backup iPhoto library’ is nice…)

Then you can click on ‘Copy Now’ and, voilà, an incremental backup is done! Remember to use a registered version of SuperDuper!