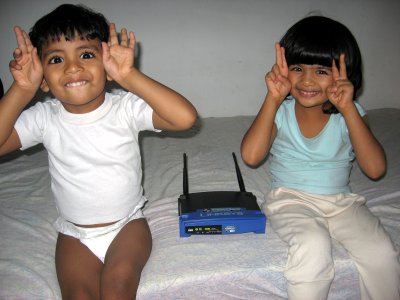 I finally got hold of my Linksys WRT54GL today. I connected it, did some preliminary tests with the Linksys firmware, confirmed that it did not work as a Wifi-Ethernet bridge out of the box, took a deep breath and started the flashing process with a new firmware developed by Thibor. 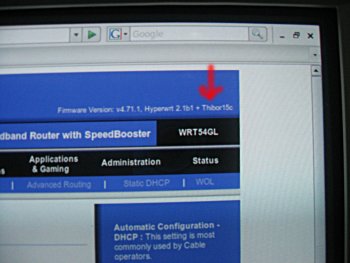 I promptly followed this to transform my WRT54GL into a brand new Wifi-Ethernet transparent bridge featuring a 4-port Ethernet switch!

The only thing that does not work is DHCP relaying. I had to assign static IPs to my PCs but this is a very very minor issue. Apart from that, the Linksys rocks and now I can browse the web from three different computers. 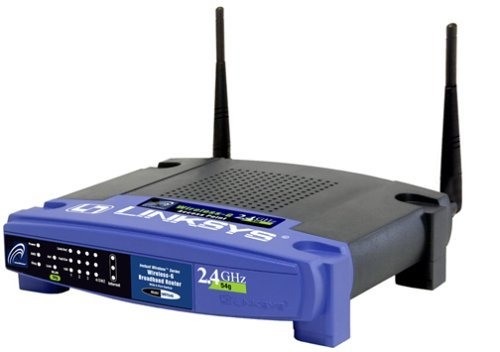 I need to connect my two desktop PCs running Kubuntu Linux to the Internet. As you know I already have a Sagem F@st3202 Livebox which has wireless and Ethernet capabilities. But as the Livebox is far from my PCs, I don’t want to have a wired connection. I’ve tried a Wifi USB dongle on the PC but (i) it is not reliable and (ii) it is a pain the ass to setup with Linux.

I need something like the Linksys WET54G which supports (as its name indicate) WET which allows the device to work as a transparent Wifi to Ethernet bridge.

Unfortunately, the WET54G is not easily found here in Mauritius and is expensive anyway.

I guess many of you have heard of the Linksys WRT54G which is a wireless router which has four Ethernet ports. It is powered by Linux and its firmware has been released under the GPL license. Notice that it is NOT a transparent bridge out of the box.

With the appropriate opensource firmware (either DD-WRT or Thibor (which is the one I want to use)), the router transforms itself into anything you would like (from a router to a firewall to a VoIP server to a transparent bridge etc.) just by changing some settings.

Just to be sure, I’m buying a Linksys WRT54GL which is certified to work with Linux. I am buying mine from a friend in Vacoas at around Rs. 3200 which is reasonable.

This means that tomorrow I’ll be able to connect my two PCs using Ethernet wired connections to the WRT54GL which will itself connect to my Livebox wirelessly and life will be cool :-)

One interesting feature provided by the Thibor firmware is a SSH server. I’ll therefore be able to open a terminal session to the Linksys. Of course, this is cool but (remember: it runs Linux!). What is even cooler is that the WRT54GL features a MIPS32-compatible processor. This means that I’ll be able to play with a pure RISC processor. I’ll even been able to write some simple C or assembly program on my Macbook or my Linux and cross-compile it to the MIPS32 processor using the GNU gcc compiler. For fun, I’ve downloaded a MIPS32 simulator called SPIM which seems to work well on my MacBook and it works on Linux and Windoze too.

Incidentally, the MIPS architecture is considered to be one of the best and simplest RISC architecture making it very nice to teach assembly programming. Heck, even Patterson and Hennessy are massive fans of MIPS.

I’ll let you know by tomorrow if everything works correctly. 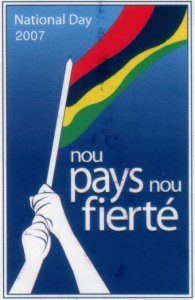 Like most of you, I am proud of my country, Mauritius. Sure, I would love to be elsewhere participating in OOPSLA, JavaOne or RailsConf but my heart will always remain here…

… except if politicians make me regret being Mauritian!!!

Here is an extract from a small booklet that was distributed to every Mauritian kid and adult during the Independence Day celebrations in March: 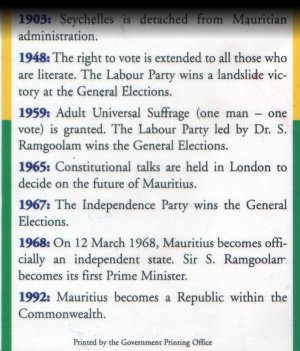 I don’t want to sound condescending but many things happened in my country between 1968 and 1992 and I find it disturbing that some people are manipulating Mauritian history for their own gains. Mauritians should know the history of the country they are living in… It is tough to imagine a young French child not being told of Mitterand or an american child not been told about Clinton… but the equivalent is being done here.

I was born in 1973 and my childhood was during the 70’s and the 80’s. Of course, I was too young to understand everything but I do know that:

Of course, many things happened after 1992 but I will leave this part to real historians.

(Thanks to Mauritius.org.uk and, of course, Wikipedia)

Thanks to Baboo, I’ve corrected a slight mistake on the duration of a state of emergency in Mauritius.

Another thing that has been bothering me lately is why don’t Mauritians learn the contemporary history of Mauritius at school? I remember, from my college days, that I learnt a lot about Mohenjodaro and the Indus Valley (etc) but nothing about modern Mauritius… Is this done on purpose?