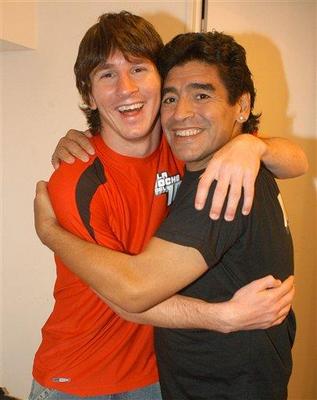 I suppose most of you have watched Chelsea’s defeat against Barcelona yesterday. And you might have noticed this small 18-years old Argentinian playing on the right of Barcelona’s attack. What’s his name? Messiah? Messia? Messi? Yep! Let me introduce to the world Lionel Messi shown above with Diego Maradona. Mark my world, Lionel Messi will become the world’s best football player very quickly! Bienvenue Lionel.

(From Wikipedia: Lionel Messi was born in Rosario city on 24 June 1987. At the age of five, he started playing football for Grandoli, a club coached by his father. In 1995, Messi switched to Newell’s Old Boys. At the age of 11, he was diagnosed with a growth hormone deficiency. River Plate showed interest in Messi’s progress, but did not have enough money to pay for the treatment of the illness that cost over £500 a month. Carles Rexach, the sporting director of FC Barcelona, was made aware of Messi’s talent, and Barcelona signed him after watching him play, offering to pay for the medical bills if he was willing to move to start a new life in Spain. His family moved with the young player to Europe and he started in the club’s youth teams. The rest is history.)

(Images courtesy this site and this other site)

Concerning the cartoons, personally, I think that things has been blown out of proportion. 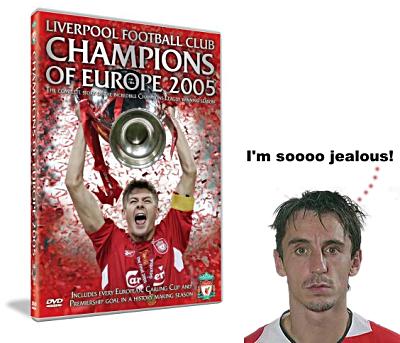 He hates scousers, scousers hate him!

That’s why Liverpool will beat the scums 2-0 today. This match is actually the scum’s biggest match of the season and they’ll have all the pressure (especially our friend pictured above). 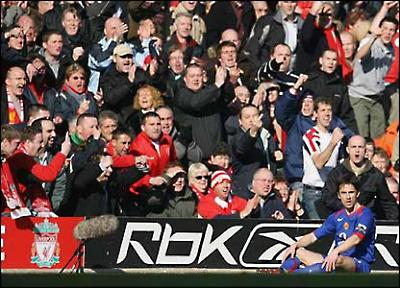 This is a nice shot of our appreciative Liverpool fans singing “Happy birthday” for the scum captain.

By the way, Liverpool has won by 1-0! And the scums are out of the FA Cup!

Disable tracker in Gnome if you do not need it