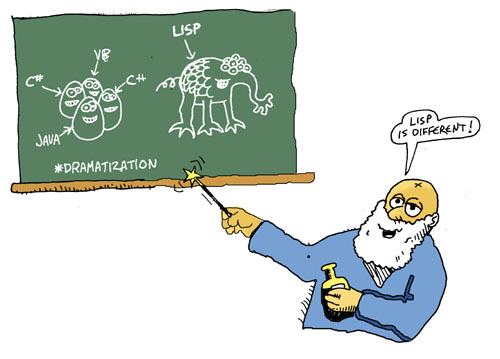 I’ve played with lots and lots of programming languages during the past 15 years (chronologically, BASIC -> Pascal -> C -> C++ -> Scheme -> Smalltalk -> Java -> Haskell -> Javascript -> PHP -> Python -> Ruby -> Lisp). Notice that I’ve used the term played. For me, programming is a very fun activity and I actually enjoy it…

As you know, I am a teacher. I teach Computer Science i.e. problem solving using modeling and programming. Unfortunately, I am not really satisfied with the currently fashionable Java language which is used a lot now for introductory programming courses. Java is a relatively good professional language but it should not be used for teaching problem solving and programming. Joel Spolsky has written a great article where he demolishes the concept of JavaSchools:

“But JavaSchools also fail to train the brains of kids to be adept, agile, and flexible enough to do good software design (and I don’t mean OO “design”, where you spend countless hours rewriting your code to rejiggle your object hierarchy, or you fret about faux “problems” like has-a vs. is-a). You need training to think of things at multiple levels of abstraction simultaneously, and that kind of thinking is exactly what you need to design great software architecture.”

Eric Raymond, in his famous article How To Become A Hacker, revealed that every programmer should learn Lisp because of “the profound enlightenment experience you will have when you finally get it. That experience will make you a better programmer for the rest of your days, even if you never actually use LISP itself a lot.”

He recommends learning different types of languages because “they represent very different approaches to programming, and each will educate you in valuable ways.”

Paul Graham has written a convincing article on how to become a better than average programmer by using Lisp. He queries: “What’s so great about Lisp? And if Lisp is so great, why doesn’t everyone use it? These sound like rhetorical questions, but actually they have straightforward answers. Lisp is so great not because of some magic quality visible only to devotees, but because it is simply the most powerful language available. And the reason everyone doesn’t use it is that programming languages are not merely technologies, but habits of mind as well, and nothing changes slower.”

My wish for 2006 is that more and more of my students at the University of Mauritius discover the real joys of problem solving and programming using nice languages like Smalltalk, Ruby and, especially, Lisp.

Happy New Year to you! 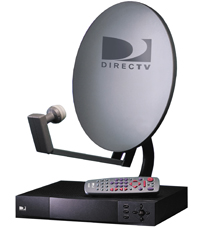 This is the last part of my ramblings about setting up a home cinema system. Today, I’ll talk about the necessity of subscribing to Satellite TV.

The local TV channels are state-owned and state-controlled in Mauritius. Therefore either (1) they are crap due to lack of creativity and/or guts or (2) they are politically-biased. You choose…

Basically, I don’t watch DVD all the time (I only watch a film, say, 1-2 times a week because of the kids. So, I personally need Satellite TV as I can’t stand the local channels. I can also add that the picture quality and the sound is better than average (but very far from what you have on a DVD).

In Mauritius, there are three competitors in this field, CanalSat, Parabole Maurice (of TPS fame) and DSTV.

I don’t know much about DSTV but I’ve been a subscriber of CanalSat and Parabole Maurice for more than one year now. I’ve just decided to cancel my subscription to CanalSat for two reasons (1) I can’t afford 2 satellite subscriptions and (2) I like Parabole Maurice more because of its dedicated English football channels.

I have many sport channels (among which Supersport 3, Eurosport, TPS Foot and TPS Star Direct) where all English football matches are shown.

I also have specific channels for cinema (in stereo only), entertainment, education, kids and news.

A good DVD player is essential if you want to have a nice (and realistic enough) home cinema. The Philips I have is cheap (I bought mine at Rs. 3000) and can read many many types of media (CD, CD-R, CD-RW, DVD, DVD-R, DVD-RW, DVD+R and DVD+RW). This is very important for me as I use the player to:

Now, as far as connectivity is concerned, nothing could be more simple. I have only two cables (three if you count AC power) coming out of the DVD player. One composite video cable and one coaxial digital audio cable both going directly to the corresponding inputs of my home cinema amplifier.

Take care not to fiddle too much with the settings (i.e. picture “enhancements” or whatever). A DVD is good enough ; you don’t need to “enhance” it! Just don’t forget to calibrate your TV properly.

And I am perfectly satisfied :-)

Andrew Fletcher has passed away