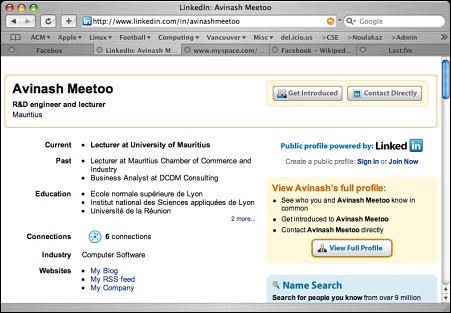 Some extremely prominent people (like Guy Kawasaki) are raving about LinkedIn at this very moment.

“LinkedIn is a business oriented social networking site, mainly used for professional networking. As of January 2007, it had more than 9 million registered users, spanning 150 industries and more than 400 economic regions (as classified by the service).

The main purpose of the site is to allow registered users to maintain a list of contact details of people they know and trust in business. The people in the list are called Connections. Users can invite anyone (whether a LinkedIn user or not) to become a connection.”

LinkedIn seems to be made for two categories of people (overlapping allowed):

I’ve created my profile (http://www.linkedin.com/in/avinashmeetoo) and I’ve a couple of contacts. In addition to that, I’ve just sent 65 invitations to people I know professionally and, believe it or not, I’m watching them add me to their network in real-time.

Personally, I see a lot of value in LinkedIn. What’s your opinion? 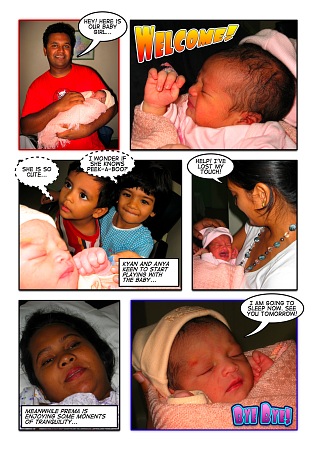 Because of the cyclone (which is gone now), I’ve spent some hours playing with the software I got when I bought my Apple MacBook. One of those is Comic Life which allows you to build comics out of digital photos. As you can see, my first ever comic is on Ashvin’s and Prema’s new baby (who still has no official name) and, as expected, I had a lot of fun doing it.

Comic Life is fully integrated with iLife. For instance, it fetches photos from iPhoto seamelessly. Another nice feature is the built-in text manipulation and distortion facilities (I’ve used that for the ‘Welcome!’ caption). Obviously Comic Life handles balloons (the areas where text appear) with grace.

Incidentally, Comic Life is not the only software you get freely when you buy a Mac. You also get:

You also get Microsoft Office 2004 for Mac Test Drive and a 30-day trial of iWork but I don’t need those… except that I’ve been thinking a lot about Keynote 3 lately as I do a lot of presentations.

Personally, I like the free software very much. They are fun, easy to use and, at the same time, bloody effective. Hey, that’s what Apple is :-) 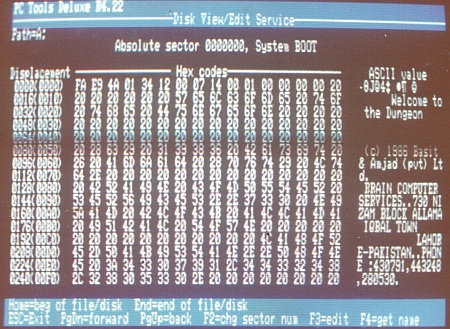 Today is an important day in my life : this is something that I wanted to share to the world since, at least, 15 years!

Yes, I have a photo of the infamous Brain Virus!

“Brain […] is, (in its first incarnation written in January 1986) considered to be the first computer virus for the PC. It infects the boot sector of storage media formatted with the DOS File Allocation Table (FAT) file system. […] Brain was written by two brothers, Basit and Amjad Farooq Alvi, who lived in Chahmiran, Lahore, Pakistan. The brothers told TIME magazine they had written it to protect their medical software from piracy and was supposed to target copyright infringers only.”

This photo must be from around 1989 (when I was 15-16) and, if you look properly, you’ll notice lots of cool little details:

I wonder how many of you knew hexadecimal when you were 15-16?