It’s with immense pleasure that I am announcing that I’ve ordered my first ever Apple computer, the newly-released MacBook laptop through LCI. I’ll receive it at latest by mid-august.

I’ve been dreaming of a Mac for years… 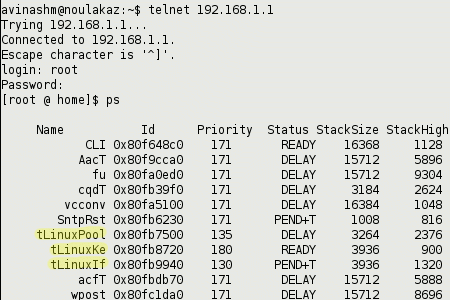 …as if I expected it to run some other operating system ;-)

Read this for a (partial) description of all available user commands (accessible from a Telnet session).

Disclaimer: use your brain!

As I wrote in my previous post, my set-top box stopped working on the 18th (less than 24 hours after being installed). I must have called Mauritius Telecom around 8-9 times since (twice today). And, of course, no bloody technician has come to my house yet to get that thing replaced.

A nice lady just called me to tell me that technicians will come at 14:30 today. I’ll keep my fingers crossed…

Two technicians came and I told them that the power supply was surely dead. They replaced it and voilà… the set-top box is alive again. Here are two problems I’ve noticed: