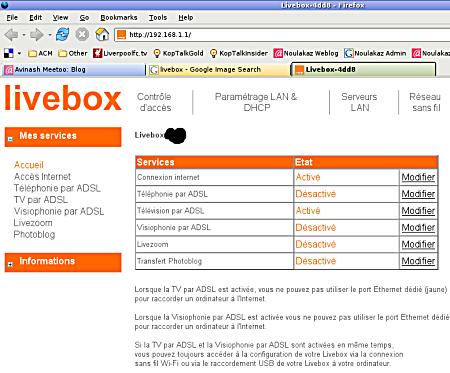 Yep! The Mauritius Telecom guys came to my house today to install the Livebox… Here are my first impressions:

The Sagem XG760N USB Wi-Fi adapter comes with a CD-ROM containing Windows drivers. But, for once, a Linux driver is readily available and is not too difficult to install. The adapter, in fact, is a rebranded ZyDAS device with contains a ZD1211 chipset. ZyDAS has an opensource driver and some nice guys have enhanced it. The latest version is currently Release 83.

Add this (for example using sudo vi/gedit/kate) to /etc/network/interfaces:

Yesterday, when I returned home from work, I noticed that my set-top box was not working anymore (so no Video on Demand and no TNT until the problem is solved). According to me, the external power transformer has died and need to be replaced. I’ve had to call the My.T hotline four times before I managed to convince them that a technician needs to come to my house to solve the problem :-(

Please note that the Livebox is still working (so Wi-Fi still rules ;-) ) but I’ve noticed that instead of having a (more or less) sustained rate of 256kbit/s when downloading something from a server outside Mauritius, the rate varies from 40 to around 200kbit/s and this is so painful… The technician (who will normally come tomorrow) will also look into this… 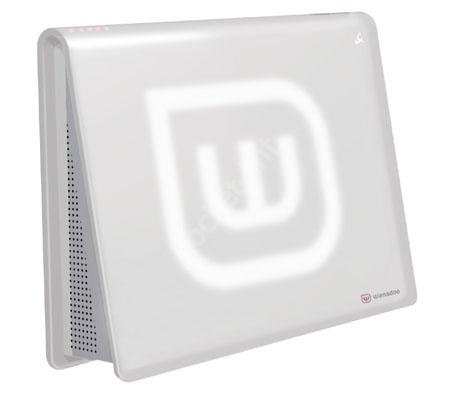 There is an interesting article in today’s edition of Week-end on the launch of France Telecom’s Livebox in Mauritius next Tuesday.

From the Livebox manual, here are its main caracteristics:

Looks like a very decent list of features to me. According to Week-end, these services will be offered in Mauritius as from next week:

By using some magic incantations, Week-end has come up with a fixed fee of around Rs. 1000 to Rs 1500 for subscribing to the service. They have also announced that it will cost around Rs. 10 to Rs. 50 to rent a film for one day. In my opininion, Internet Telephony will also be separately charged (or restricted to some specific countries). In some countries, the Bluetooth antenna is disabled and a transfer limit is imposed for the Internet connection.

I’ll post an update on Tuesday. Let’s all cross our fingers ;-)

A nice lady from Telecom Plus has called me today and has offered me the Livebox at the same price I’m paying ADSL right now, that is Rs. 950+VAT (i.e a little over Rs. 1000 for 128Kbit/s). A Telecom Plus salesman/technician will come at my place tomorrow for a demo of the Livebox. I’ll keep you posted.

Two salesmen (so only salestalk and not a real demo) from Mauritius Telecom came to my house today (notice not Telecom Plus) and offered me the MY.T service at exactly the same price I’m paying ADSL 128 (i.e. Rs. 950+VAT). I get:

Lots of pros, isn’t it? Twice my previous ADSL bandwidth! A set-top-box for TNT! But, unfortunately, there is one massive catch:

Personally, I don’t care as I don’t indulge in piracy. But I know a lot of people that won’t like this “feature” a lot :-)

Technicians will come for the installation in (maximum) 5 days. I’ll keep you posted.

Another lady called me today and told me that MT technicians will come to my place on Monday (17 July) to install the Livebox and the set-top-box. As usual, I’ll keep you posted.

…is really not simple as the actual history file (history.dat) is encoded using the MORK format which is very tough to parse.

Fortunately, it is possible to export history.dat to a text file but this is a manual process.

One first possibility is to export all URLs which have been accessed from Firefox itself. To do that:

Unfortunately, we only get the URLs. To get more information, we can use a perl script written by Jamie Zawinski.

I use this command to know what are the websites I regulary visit:

and here is the result:

I’ve simplified the URLs for security purposes (I presume :-) ).

There is no 1Gb limit on MyT now

My own DJ at home: Genius Mix