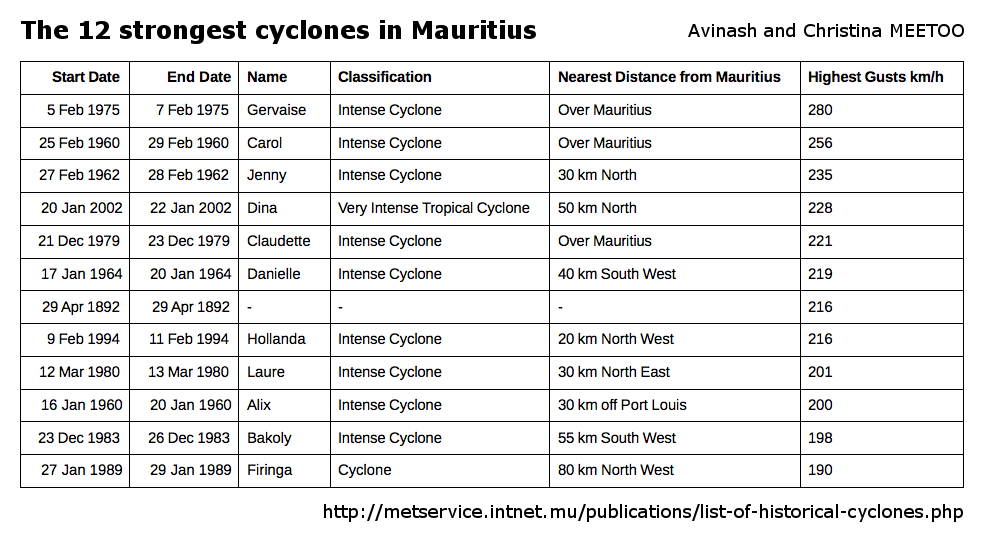 While browsing the Meteo Mauritius website, we found a list of big cyclones which have affected Mauritius since 1892.

As I was born in 1973 and Christina in 1975, some of those cyclones evoked very distant memories: Gervaise and Claudette. Some, on the other hand, left a big impression on us when we were growing up during the 80’s and 90’s.

I remember how strong the winds of Bakoly were. We had just moved to Quatre-Bornes and some of the small trees in my yard were bending over. I was 10 at that time and I was very afraid. Christina was living in an old wooden house with a corrugated iron roof and it was very scary too. The living room (varangue) had a lot of glass window panes and she thought that they could be shattered by the winds at any time. There were also huge trees in the yard and the atmosphere was very eerie.

Firinga and Hollanda also made a big impression on our young minds.

At that time, whenever there was a big cyclone, we knew that we wouldn’t have electricity for some days but we didn’t really care. We were less dependent on technology at that time: no 24h TV channels, no computers, no smartphones and no Internet. As a matter of fact, this forced us to stay together and play various games (rummy, gare aux coeurs, whist, etc.) Some indulged in Scrabble and Monopoly and it was nice (I suppose for kids — parents had more worries than us!)

Since then, we have had weaker cyclones. Anya (born in 2002) and Kyan (in 2004) have never witnessed the kinds of cyclones we saw during our childhood. And, to be rational, this is a good thing…

What exactly is Yahoo! Pipes?