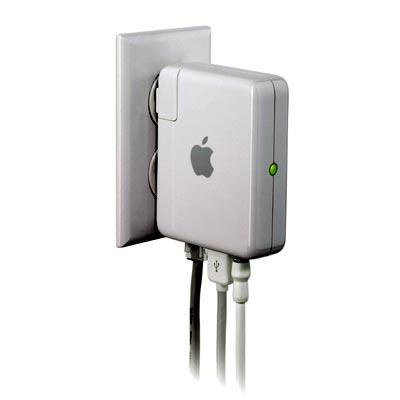 Today, I bought an Apple Airport Express. And I can say I’m very very impressed!

The Airport Express is tiny and plugs into the mains directly (there is no need for an external transformer.) It is a fully-featured Wifi 802.11n access point (which means it has theoretically five times the bandwidth of a 802.11g device like the MyT Livebox) which can also work as a simple bridge (if you already have a router with a DHCP server for example which is true for the Livebox.) Personally, I’ve connected mine to my MyT Livebox and disabled the Wifi on the latter.

If you look at the picture above, you’ll notice three cables: an Ethernet cable, a USB cable and an audio cable. The Ethernet connection is used to connect the Airport Express to the Internet (the Livebox in my case.) The USB cable connects to a printer and the latter immediately becomes available through Wifi (the Airport Express essentially contains a print server.) As I have one USB printer (a HP P1006 black and white laserjet) at home and three computers, I think I’ll use that a lot.

The third cable is where the real magic occurs. The Airport Express can connect to your audio amplier or home-cinema receiver either using an analogue or a digital connection! The digitial output is bit accurate meaning that the Airport Express does not in any way modify the audio (audiophiles and music lovers will love that! I know I do.)

And where does the Airport Express get the audio? From any application running on any of your computers!

Out of the box, it works with iTunes (which I use for listening to my MP3s and AACs) and I can say it works flawlessly even when moving my MacBook around the house. To be honest, I had to stop using a dashboard widget, Airport Radar, because it is incompatible with the Airport Express but that’s not a big deal.

Interestingly, I can also listen to all the Last.fm radio stations using iScrobbler because the latter uses iTunes to play the audio. 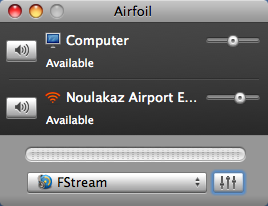 With the addition of the $25 Airfoil, it becomes possible to stream the output of any application to the Airport Express. For instance, I’ve streamed the audio from Safari and Firefox when watching YouTube videos. I’ve also streamed audio from FStream and RealAudio Player which I use to listen to internet radio.

In the US, the Airport Express costs $99. In Mauritius, it’s more expensive (obviously) and I’ve managed to get one at Rs 4300 + VAT at LCI. Personally, I find the price acceptable. LCI makes a Rs 800 profit and gives the VAT to the Governement.

The Apple Airport Express, like most things Apple, is a bloody excellent gadget! Rating 9/10 (easily 10/10 if it came with Airfoil.)

Day 3: A big Linux-based cluster and the practice session