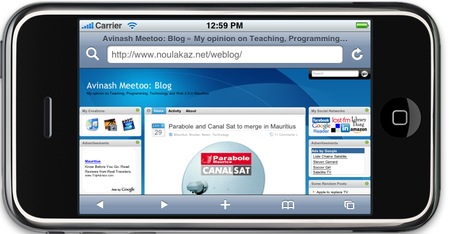 Patience is a virtue.

I’ve been told that the iPhone 3G will shortly be available in Mauritius for purchase. To be more precise, the devices are coming to Mauritius this month and are expected to be sold as from November.

Unfortunately, I don’t know anything about the price but I’ll hazard a guess of around Rs. 20,000 for the 8Gb model and Rs. 23,000 for the 16Gb model in line with the quoted price in the Hong-Kong Apple Store. I know this is steep but you need to bear in mind two important things:

Firstly, the iPhone is not only a cellphone despite its name. It is a Wifi-enabled computer (with a powerful browser and enterprise-grade email client) and a video iPod and a GPS receiver and a game console and a digital camera which can also be used to make 3G phone calls. Additionally, hundred of free and commercial applications can be downloaded from the Apple iPhone AppStore (direct link to the AppStore for iTunes users) greatly increasing the capabilities of the iPhone.

Personally, I don’t intend to use my future iPhone in this fashion. Remember, it has a Wifi antenna and, as I am nearly always near an access point, I will use Wifi when browsing and checking my emails. What I am implying is that I don’t think I’ll have to buy more credits to be able to use my future iPhone compared to what I’m paying now with my trusty Nokia 6288.

So, in a sense, we’re getting a better deal than Americans as we have the choice of not using (and not paying for) the data plan if we don’t want to. Heck, we can even choose not to use 3G!

I already have an iPhone 3G… except that it is just a software simulator. In fact, today I installed the Apple iPhone Software Development Kit on my MacBook (you need a Mac…) which, in addition to all the tools needed to build iPhone applications, features this iPhone simulator. It works, it’s nice-looking and it gives me the opportunity of making nice screenshots.

What can I ask more?

I need to convince my Minister of Finance (aka my dear Christina) to allow me to ask Father Xmas a black 16Gb Apple iPhone 3G in December :-)

Day 5-6: Back to Delhi and shopping at Karol Bagh