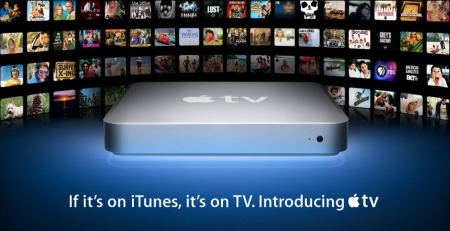 I’ve been reading Robert Cringely latest article on the latest gadget from Apple, the Apple TV, intensely and it is extremely interesting.

The Apple TV is being advertised by Apple like this:

“Say youâ€™ve just downloaded Cars from iTunes. Instead of huddling around your computer to watch, you pop some popcorn while your computer wirelessly syncs your new flick to Apple TV. Then you pull up a seat, put up your feet, and pick up the included Apple Remote to play your movie on TV. Give yourself a hand: You’ve just changed the way you watch digital media.”

But if you think about it, it’s not cost effective to have a hard disk inside only to store 640×480 video sequences (as those can very easily be streamed from your PC or Mac running iTunes – it requires only 1.5Mbit/s). Of course, it’s nice to be able to watch something even if your computer is switched off but could the hard disk be used for something else?

“If the Apple TV is plugged in it is turned on. Did you notice that? That means the hard drive will have at least the capability of running 24/7. Now envision a BitTorrent-like file distribution system that is controlled primarily by iTunes, rather than by you or me. A centrally controlled P2P system is VERY powerful because it allows for the pre-positioning of content.

Say Disney releases Cars 1.5 — a direct-to-DVD release expected to sell millions of copies in its first few days. There is no way iTunes could even hope to participate in a launch like that simply because there isn’t enough bandwidth at a good price — or any price. Even BitTorrent would have troubles handling a small part of such a launch until enough seeds were populated and running. But what if the movie was effectively pre-seeded — loaded over a few days on a distribution tree of thousands of Apple TV boxes which could then deliver the movie locally at high speed if purchased. Or if not purchased the seeded copies could still work together to serve other Apple TVs on the same ISP subnet.”

The more I think of this the more I see it might actually happen.

Imagine a sea of Apple TVs always on participating in a massive P2P movie distribution network. If the movies are pre-seeded (i.e. they are sent to the Apple TVs, say, one week in advance), then, in essence, they would be watchable the second they are actually released by the film company.

Will Apple change the way we watch films? Or will the hard disk only be used to cache iTunes media? Only time will tell.

But this being Apple, I think that Robert Cringely might be onto something.

Lexpress.mu is not working well...