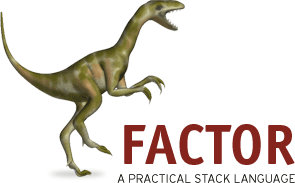 I’ve just discovered Factor, a new programming language. It is a stack-based language like Forth and Postscript. Factor works on many different platforms.

I’m currently looking at it as one of the possible programming languages I’ll cover in my Programming Languages module at the University of Mauritius. Simple stack-based languages are interesting because they are low-level meaning that a student who understands Factor really understands how a computer works. And also the Java virtual machine which is also a stack-based bytecode interpreter.

The Factor programming language is simple. For example,

This morning, Pascal Grosset and I have been experimenting with different functions in Factor using the Factor workspace which is a great IDE. We have come up with the following:

big looks at the topmost element of the stack and replace it by t(rue) if it is bigger than 10 and (f)alse otherwise. t and f are Boolean values.

The swap is used to swap (what else?) the two topmost values on the stack. Notice that 0 is pushed before. And the – only does 0 – the number which was there already i.e. calculates the negative of that number.

What about this one? It contains a conditional statement (the if) which consumes three elements on the stack: a Boolean and two quotations (which are like Smalltalk and Ruby blocks which are evaluated later if needed). The first quotation [ swap drop ] will be evaluated if the condition is true and the second one [ drop ] otherwise. The 2dup function simply duplicates the two topmost elements on the stack. Get it?

Do you recognize our friend factorial? drop simply discards the topmost element of the stack. Notice that fact is called recursively until it hits the boundary case.

This is another friend, the Fibonacci function. Have fun understanding it.