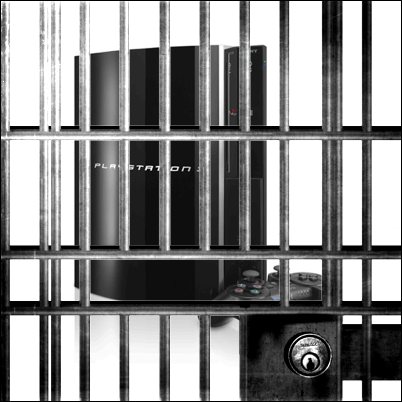 You see, I am not a gamer. I use my PS3 mostly to watch movies and to browse the Web. The built-in Web browser is fine and supports Flash so I indulge in YouTube pleasure from time to time with it. The media playing capabilities of the PS3 are also very good and the PS3 supports a lot of video formats out of the box e.g. MPEG1, MPEG2 (VOB), MPEG4 (DivX and H264) and WMV. I routinely connect my PS3 to my DNS-323 NAS to enjoy the latest series and movies.

And, if I want to browse using a better browser than the built-in one or I want to watch something stored in a more esoteric format, I just reboot my PS3 and, voilà, I have a Ubuntu Linux computer in my living room! Yes, the PS3 allows installing third-party operating system and this makes the device more desirable (at least for me.) Interestingly, this is why the US Department of Defense and the US Air Force bought myriads of PS3 in the past: they used them in clusters to build supercomputers as the PS3 has a very powerful Cell processor inside.

Today, Sony released a new firmware update for the PS3 which essentially make Linux inoperative on it. As quoted on the Electronic Frontier Foundation website, Sony is stealing features from my PS3. Here is a quote from the EFF:

In short, Sony is effectively downgrading PS3s already sold and in the hands of consumers — when you bought it, it could play games, play Blu-ray discs, and run GNU/Linux. After April 1, it’s an inferior product.

To be fair, it seems Sony did that because a guy called George Hotz managed to

use the [Linux] feature [on the PS3] along with a bit of soldering in a manner that gave him more control over the PS3 hardware than Sony had intended.

So, today, Sony responded and killed Linux on the PS3. Sure, the upgrade is optional (meaning that my Ubuntu Linux is still perfectly functional as I do not intend to upgrade) but here is what I lose as a result of not upgrading:

(2) The ability to use online features that require you to sign in to PlayStation Network, such as chat.

(3) The ability to use the online features of PlayStation 3 format software (like network play and software updates.)

I am going to lose a lot of capabilities but I’ll keep my Linux. The one thing that bothers me a lot is that I won’t be able to upgrade software (i.e. games) online so, as more and more of them are just being released full of bugs (and I won’t be able to patch the game), I’ll think at least twice or even thrice before buying a game for my kids (as I’m not a gamer myself.)

Why this is a stupid move

Sony should have patched the PS3 so that the hack by George Hotz stops working. Of course, another George Hotz would have come later with a new hack and Sony would have had to patch the PS3 again. But this is normal when you sell a product with DRM in it… because DRM is, well, a stupid idea.

DRM is about making people buy hardware and software controlled by a third-party. And, of course, people naturally want to be free. George Hotz is not a bad guy. He is just a guy like you and me who became fed up with the idea of owning a fantastically powerful device over which he had no full control: Sony allowed Linux to run (until yesterday) but, in parallel, disabled most of processing power of the Cell processor as well as the graphical processing unit just before booting the Linux kernel. So, in essence, Linux was running on a very crippled PS3.

A lot of people (who had no earlier interest in the PS3) will now try to hack the new PS3 firmware. And I guess they’ll succeed in a more or less near future (ask the Nintendo people what they think of Wiibrew for instance.) Maybe we’ll see a PS3brew community emerge really soon now.

Thanks Sony for being stupid.

Is this (only) coincidence?