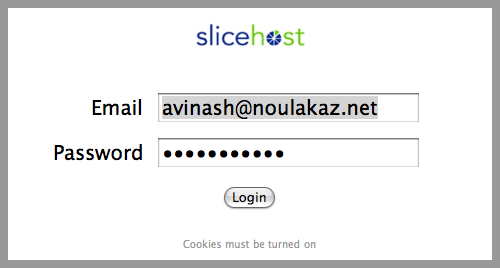 Did you notice that my weblog is not hosted at Icdsoft anymore? I have moved to a shiny virtual private server courtesy of Slicehost which uses virtualization to run multiple operating systems (hence multiple VPS) on the same server.

I first heard of Slicehost about two months ago when looking for a hosting company supporting Ruby on Rails (which unfortunately Icdsoft isn’t). Their VPS plan includes (I quote):

First of all, they don’t accept customers if they feel they don’t have the hardware resources. In that case, you are put on a waiting list and they order new hardware. That why I had to wait two months to move to Slicehost. Now, this “glitch” is also a benefit in the sense that you know that everything will be great once you are accepted.

The second glitch is the price. The smallest hosting plan called 256slice (with 256MB of RAM, 10GB of HD space and 100GB of monthly transfer) is $20 per month. Now, this is mostly negligible for an American or a company but not for me.

I’ve managed to convince Christina that this is worthwhile for two reasons:

Ruby on Rails is a Big Thing…