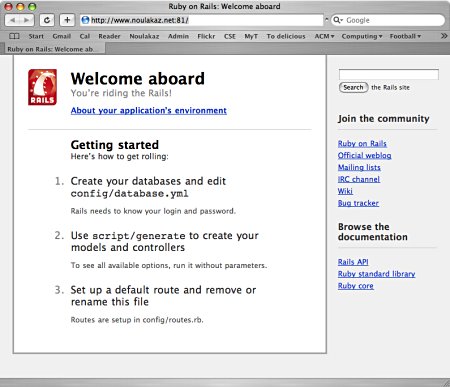 As you know, I now have my own virtual private server hosted at Slicehost and on which I’ve installed the latest Ubuntu 7.10 Gutsy Gibbon.

The main reason why I’ve changed my hosting company is that I want to have fun with Ruby on Rails and Ruby technologies in general.

The server edition of Ubuntu does not install Ruby and the Ruby package manager (called Rubygems) out of the box. I did:

This installs Ruby 1.8.6 and a relatively troublesome version 0.9.4 of Rubygems that needs to be updated as quickly as possible to a newer version. The reason is that this old version of Rubygems uses too much memory and will fail on my 256Mb slice! To install the new version (0.9.5), I did:

This installs a beta version (0.9.4.7) of Rubygems which works well when memory is limited. Notice that I typed that line twice. It failed the first time but succeeded the second time. Your mileage will, of course, vary. I then did:

and, voilà, the latest Rubygems (0.9.5) is installed. As a confirmation, here is what I now have:

The most important information is the :bulk_threshold => 1000 which indicates that Rubygems will limit its memory consumption to 1000 units (kb?) which rocks! Now, everything can be installed without exceeding the memory of the server.

2 – Ruby on Rails and Mongrel

Now that Ruby and Rubygems work well, it’s high time to install Ruby on Rails and its friend, Mongrel.

Mongrel is (I quote once more) “a fast HTTP library and server for Ruby that is intended for hosting Ruby web applications”.

Before installing those two Ruby gems (which is what Rubygems call an add-on package), I did:

build-essential contains a C/C++ compiler which is crucial when installing some gems because, well, some of them are written in C/C++… Furthermore, ruby1.8-dev contains some essential tools when are required for installing gems. Both are important because gems are downloaded in source format (in either C/C++ or Ruby) and need to go through a number of steps before actually being installed.

I installed Ruby on Rails and friends with:

3 – Testing Ruby on Rails and Mongrel

I then created a skeleton Ruby on Rails application:

and I launched a Mongrel instance on port 81 (because I can’t access my server from my client if the default port of 3000 is used…) with:

and the result I got was:

I’ve stopped the server since. So you won’t be able to connect to it. But for your own enjoyment, feel free to stare on the above screenshot :-)

The process is easy and well documented elsewhere. Except for the bloody Rubygems issue which forced me to hard_reboot my VPS for the first time in its (short) life.

Next time, I’ll write something on using Capistrano to deploy a Ruby on Rails application automatically.