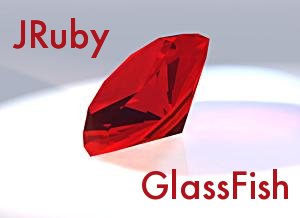 JRuby is a 100% pure-Java implementation of the Ruby programming language.

For example, this is a small Java program that reads words from the standard input and output the signature of the word (i.e. the letters of the word in sorted order) followed by the word. Cultured readers will recognize an exercise from Programming Pearls by Jon Bentley:

46 lines! Not too bad for Java incidentally. Notice that I’ve used generics that have been introduced in Java recently. The heart of the program reads a word in a string, sends its characters to a vector, sort that vector and, finally, output the letters in sorted order.

The same program in Ruby is:

which is an order of magnitude shorter and clearer (chomp! is used to strip the newline from the end of the word when input).

This program is a normal Ruby program and, hence, using Jruby it can be run atop a JVM. I’ve done some tests on my MacBook on a list of 234,936 English words:

From this, I conclude that for small programs, plain Ruby is quicker than anything that run on the JVM (another conclusion is that JRuby’s performance is comparable with Java). This is understandable because the Ruby interpreter is designed for small programs like this. But what about when you have to run a substancial Ruby on Rails application?

According to some important people, this is where JRuby really shines… 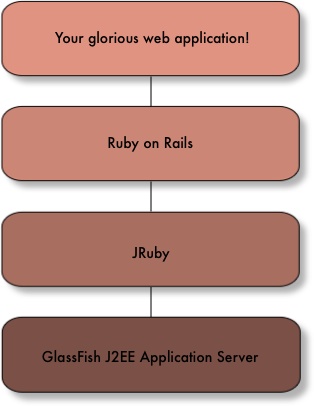 Eddy has a much quicker version of my Java program that runs in 4.222s and is therefore quicker than the plain Ruby version and is around 6 times quicker than the JRuby version. Eddy uses toCharArray() instead of sending the individual characters of the String in a Vector.

If you read the comments, you’ll see that a number of people are missing the point of this post. Maybe it’s badly written. The point is that Ruby of Rails applications can now run on JRuby which can itself run on GlassFish which is a good thing in my opinion.

Alternative languages for the Java VM

Is Java getting better with age?