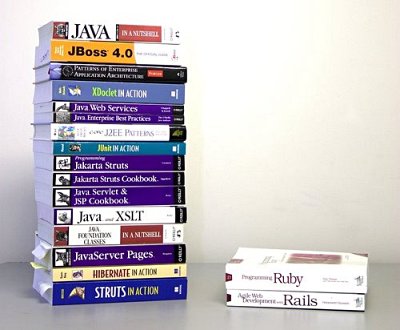 Amazon has just sent me the book Agile Web Development with Rails that I ordered one month ago.

This book focuses on Ruby on Rails, the open source framework to write web applications in the Ruby programming language (which is making a lot of buzz on the Internet right now).

Previously, I had purchased Programming Ruby.

I guess I can start experimenting with Rails a lot more now as I finally have the two books pictured on the right :-)

By the way, both Ruby on Rails and Ruby Gems, the Ruby package manager, have just been updated. I did this on my Linux box:

By the way, here is a tip I got from the Agile Web Development with Rails book on how to generate the Ruby on Rails API documentation automatically:

A directory called api will be created into the doc directory. Move it to the desktop and, voilÃ , you have the complete API documentation.

Ruby on Rails is a Big Thing…