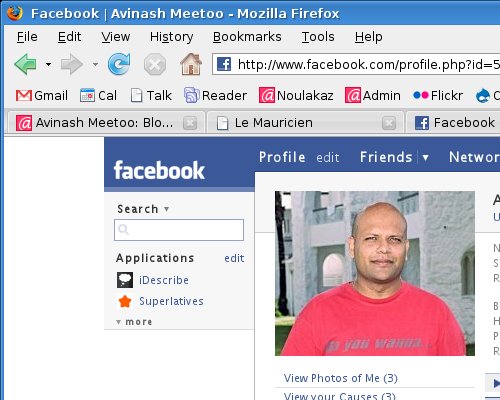 Eddy has just told me of an article to appear in Today’s edition of Le Mauricien on the Mauritian’s Governement wish to block Facebook (i.e. censoring the social networking website).

This must be a silly joke.

I guess Joel de Rosnay will be very very unhappy if this news is confirmed tonight. And Microsoft too with the money they have just injected in Facebook. And, of course, everyone who is a partisan of free speech (and this includes me).

Whoever is behind this is a retard (if true of course).

The article is now online and states:

So, it was just a storm in a tea-cup. But wait! Who has ever told ICTA that they have the right to censor 1,000,000 Mauritians from accessing Facebook (or any other Internet site for that matter)??? They could (should?) have asked the Facebook admin to get rid of the profile without disrupting normal access to the website.

This is un mauvais précédent and I don’t like the smell of it at all. You should think twice the next time, ICTA. We are not going to tolerate censorship in our Republic of Mauritius once more.