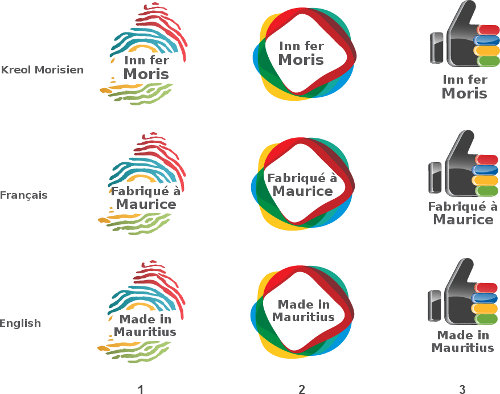 It’s funny how we, Mauritians, have still not understood that Kreol Morisien is a full-fledged language.

Take for example the Made In Moris campaign. What is  “Made In Moris” supposed to mean? Why do people insist in mixing Kreol Morisien with English? Or French?

I have no problem using either Kreol Morisien, English or French. “Ine fer Moris”, “Fabriqué à Maurice” or “Made in Mauritius” all sound ok.

For example, for the local market, “Ine fer Moris” would be great. But for export products to France, “Fabriqué à Maurice” is good too and, of course, “Made in Mauritius” for all other uses.

What would you have chosen?

Now, coming to the three logos themselves, I must say I’m not too happy with any of them:

Don’t tell me that criticising is easy while actually doing one logo is hard. I know that. But, as you all know, no one is paying me to come up with a logo.

And, please, come up with a nice logo.