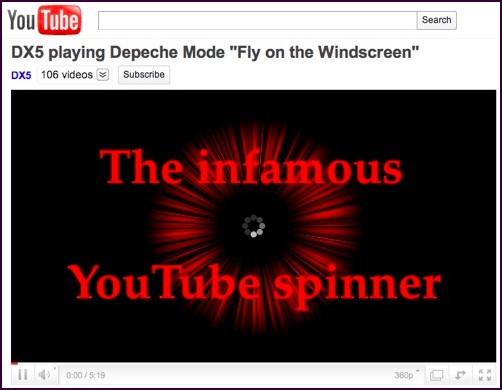 Yesterday, Mauritius Telecom announced that my Internet speed will be doubled from 512kbit/s to 1Mbit/s without an increase in subscription fee by tomorrow, 1 December 2010, exactly 20 months after another similar doubling in speed.

Naturally, I am happy. And getting 1Mbit/s is definitely going to be an important milestone for me and, I guess, a lot of Mauritian friends. We’ll leave the world of the kilobit to join the one of the megabit per second!

I have some doubts.

I have also noticed that I regularly get the infamous YouTube spinner after dinner and during the week-end. I suppose that a lot of us like to watch videos at the same time. And I understand that the slowdown happens throughout the island.

The technical explanation for this slowdown is simple: Internet bandwidth from Mauritius to elsewhere (more specifically the USA) is not large enough for all of us to watch different YouTube videos at the same time.

And we need to watch different YouTube videos. Or, else, how are young people going to be inspired to change their world? This is the only way to become part of history.

I sincerely hope that Mauritius Telecom is going to increase the international bandwidth tomorrow. But, to be frank, I have some doubts.