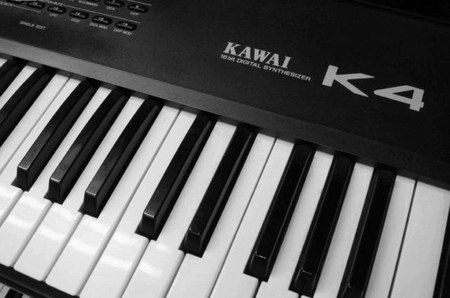 When I was 19-20 (i.e. more or less the same age as my current students) I started composing music and the result was my first ever album released in 1995 pompously entitled “My Contribution to Art” featuring the following tracks:

Interestingly (for me at least…), “My Contribution to Art”  is a concept album which tells the story of a boy (let’s call him A. before you ask) who meets a girl (call her A.), falls in love, gets dumped and only finds happiness again when he meets another girl (call her C.)

I have to be frank, some of the songs are crap but, what the heck, they are mine and I spent hours working on them. I composed the tracks using my old Amiga 500 running Bars & Pipes Pro and my trusty Kawai Kawai K4 synthesizer from 1993 to 1995. I was lucky to have saved them in MIDI file format and I managed to easily import them in Logic Express on my MacBook this week-end. I was delighted to be able to record them in pristine 24-bit audio quality directly from my still-living Kawai K4 and apply some mastering polish.

I am now a proud artist with two albums, My Contribution to Art and So Logical (released in 2004), both available as free downloads as well as free streaming on last.fm.

You’ll notice that neither album has a cover yet. Maybe someone can come up with interesting (and appropriate) covers for the two albums? I don’t mind people using my photos on Flickr. I’ll invite the “winner” for lunch in a nice restaurant…

How to make Coverflow perfect (IMHO) in iTunes 7