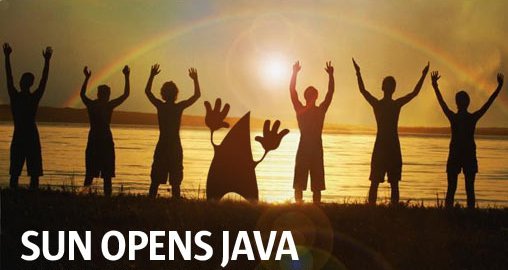 For those who want to see real source code (to be sure that they are not dreaming), here is the Hotspot Virtual Machine (VM) and the Javac compiler…

“One of the strongest motivations to select the GPL was the announcement made last week by Novell and Microsoft, suggesting that free and open source software wasn’t safe unless a royalty was being paid. As an executive from one of those companies said, “free has to have a price.”

Free software can be free of royalties, and free of impediments to broadscale, global adoption and deployment. Witness what we’ve done with Solaris, and now, what we’ve done with Java. Developers are free to pick up the code, and create derivatives. Without royalty or obligation.

Those that say open source software can’t be safe for customers – or that commercially indemnified software can’t foster community – are merely advancing their own agenda. Without any basis in fact.

That’s beautifully said. And this is fantastic news for poor countries like Mauritius. Paying for software is hard enough when you are poor… but when the software is some crap beta-release from Microsoft then it is plain stupid… Sorry, but that’s truth :-)

The future is soooo bright that I have to wear shades. I’m sure the Tomcat, JBoss, Spring and Eclipse guys are as happy as I am with this announcement. They should be. This is history in the making.

An update: I was speaking to some colleagues and they asked me the same question: Why? Why is Sun doing this? What will they gain?

Ok, if you are asking yourself the same question, you should know that developing quality software is really expensive and not that lucrative (because of piracy for example). That’s why IBM has (more or less) phased out AIX and is advising its clients to use Linux instead.

Sun does not want to use its (limited) funds to develop Java anymore. They want to concentrate on hardware (perhaps) and services (where big money is – ask IBM…) But they still want Java to thrive (a first step was the setting up of the Java Community Process some years ago). And now they release J2SE, J2ME and J2EE under the GPL (which is bound to please us, OSS geeks: even RMS is delighted!) and hope that those who do Tomcat, JBoss, Spring, Eclipse, etc. will start innovating (now that they have the source code of the Hotspot JVM for instance) and make J2EE become something so formidable that even our friend Bill won’t be able to mimic it…

The tide is rising. Open source is the future. Microsoft is the past.

Where do you want to go today?

Beware of type erasure in Java