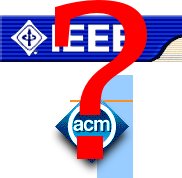 I want to join ACM ko keep in touch with reseach in Computer Science. My field of research being OO programming languages and OO frameworks, SIGPLAN is obviously the main reason I want to join ACM.

SIGPLAN organises many conferences throughout the year. Three are very important to me:

I’m planning to get a full ACM membership with complete access to the ACM Portal.

Now, I’ve just read a blog entry comparing the relative merits of IEEE & ACM and, in the end, the author finally joined ACM as, according to him, ACM was “more academic” implying IEEE was “more practical”.

Essentially, you can consider me as being an ACM member… except if you can convince me to subscribe to IEEE (or any other professional computer society) instead :-)

I’ve done it! I am now an ACM member :-) I have paid only $43 (instead of the normal $198) as Mauritius is (as far as ACM is concerned) an Economically Developing Country.

I now have those benefits: web-based IT training courses, online IT books, full-text from ACM magazines and journals, bibliographic citations, preferential price for conferences, 34 special interest groups (among those SIGPLAN), networking opportunities, etc.