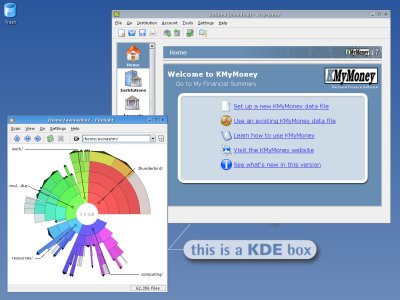 As you can guess by looking at this screenshot, I’m using KDE now (and I’m pleased to tell you that it works perfectly on my Athlon 64 running 64-bits Gentoo Linux). I’ve rediscovered KDE by accident… which I will relate now :

I quickly realised that there was lots and lots of great KDE applications like AmaroK which I didn’t know about because of my fixation on Gnome and Gtk applications. And I was devastated… So, I decided to give KDE a second chance (as I was a previous KDE 2.0 user before switching to Gnome for some unknown reasons).

KDE has become a (nearly) perfect desktop environment. I run version 3.3.2 and everything is beautiful and snappy.

The standard KDE applications are OK but nothing to shout about. Fortunately, I quickly discovered KDE-Apps where I found some very promising KDE apps which I intend now to test :

I am also testing blender which is an open source software for 3D modeling, animation, rendering, post-production, interactive creation and playback. Blender is not a KDE application though.

Some thoughts about GNOME 3.0…

Dear students, I need your feedback!