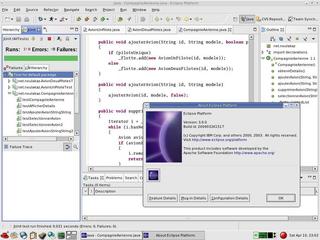 I’ve been using the Eclipse Integrated Development Environment for Java programming language for the last year now and I can say I’m impressed.

In fact, I’m so impressed that I’ll make a bold move and say aloud: Eclipse is the BEST programming tool ever.

It’s nicest featured according to me are: its integration of JUnit for unit testing, its rather magnificent refactoring facilities and its compatibility with CVS for version control and team development.

I also like the fact that it’s compiler is very quick and that its sourcecode editor has a lot of very useful features (like syntax colouring of course but also all sorts of automatic error correcting tools).

But the best thing is that Eclipse is Open Source Software meaning that it can be freely downloaded and used (and abused…). Thanks to IBM for having created and donated something as powerful as Eclipse to the OSS community.

Eclipse works wonderfully well in Linux but it also works in Windoze and MacOS X.