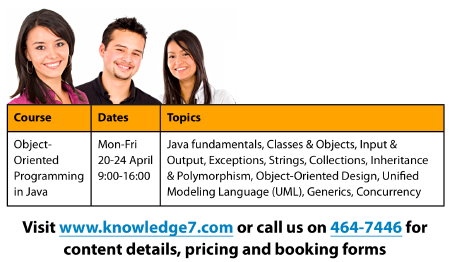 A few weeks ago, I blogged about the imminent start of our MQA-approved Object-Oriented Programming in Java course next Monday 20 April. The topics which are going to be covered in depth are:

Notice that the focus is both on object-orientation as well as Java. In my opinion, someone who aspire to eventually master enterprise technologies like Struts, Spring and Hibernate needs to have both skills.

Designing object-oriented software is hard. Expert designers know not to do is solve every problem from first principles. They reuse solutions that have worked before. That is why I am putting so much emphasis on sound object-oriented design principles (including the use of design patterns.)

In the coming weeks, Knowledge Seven Ltd will launch two further Java courses which will build upon this foundation Object-Oriented Programming in Java course:

These two courses are intensive and the trainee(s) will have to possess a good mastery of object-orientation and Java in order to follow them satisfactorily (for example, by following this Object-Oriented Programming in Java course.) In fact, I have purposely designed the three courses to be complementary.

There are still seats left and it would be a pleasure for us to train you or people from your company. Do not hesitate to contact us! 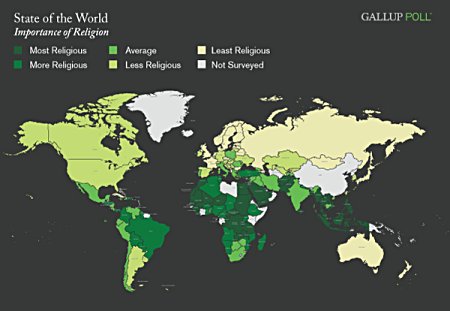 While browsing today, I came up across this Gallup survey done in February on the importance of religion in different countries all over the world:

The countries where people give a lot of importance to religion are: Egypt, Bangladesh, Sri Lanka, Indonesia, Congo, Sierra Leone, Malawi, Senegal, Djibouti, Morocco and the United Arab Emirates. Notice that most of them are countries where a lot of people are poor (and some people are extremely rich.)

Countries where people generally do not give a lot of importance to religion are: Estonia, Sweden, Denmark, Norway, the Czech Republic, Azerbaijan, Hong Kong, Japan, France, Mongolia, Belarus.

Apart from Mongolia (?!?), these countries can be separated into two groups:

Now, I don’t want to jump to conclusions but it seems to me that  Sweden, Denmark, Norway, Hong Kong, Japan and France are countries which are rich, fairly democratic and which have a good (and, for some of them, excellent) education system. Does this imply that educated people tend to give less importance to religion? And, more interestingly, does this mean that atheists (those without a belief in any God) generally have a high level of education? Yes, it would seem.

And what about Mauritius? People give a lot of importance to religion in our country (especially if they need to be elected and/or they have problems.) And the Minister of Education said our education system has failed to deliver. Is there a correlation between the two?

By the way, I’m an atheist. 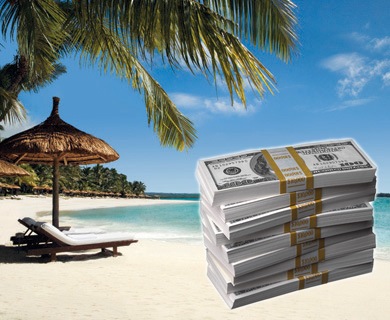 According to The Economist,

What identifies an area as a tax haven (paradis fiscal) is the existence of a composite tax structure established deliberately to take advantage of, and exploit, a worldwide demand for opportunities to engage in tax avoidance.

In Mauritius, law allows for the creation of companies with a Category 2 Global Business Licence. Those companies share the following characteristics (as confirmed in this official document from the Financial Services Commission):

Two days ago, Eco89, which is a spinoff of Rue89, which describes itself as a “Site d’information et de débat sur l’actualité, indépendant et participatif”, published an articled entitled Maurice, Singapour, Delaware : ma planète off-shore en 3 clics. The article explicitly says that Mauritius is a tax haven because the Category 2 Global Business Licence allows companies from developed countries to evade tax in their own country by setting up their headquarters in Mauritius. The article even mentions that “le nom du propriétaire n’est pas révélé aux autorités” which is something I find very dangerous. Who knows what kind of people own companies in our country?

Yesterday, the French President, Nicolas Sarkozy said during an interview in Le Figaro:

Reading these articles as well as the official documents from the Government of Mauritius, I can’t prevent myself feeling very concerned. Is Sarkozy talking of Mauritius? Has Mauritius really become a tax haven? And, more importantly, à qui profite le crime if this is true?

The five biggest problems in Mauritius

The Focusrite 2i2 audio interface and its free plugins