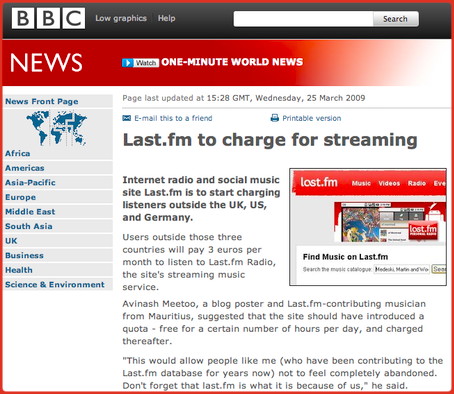 Yesterday, I was astounded to learn that Last.fm was going to charge people €3.00 per month to listen to streaming radio except those living in the US, the UK and Germany. And I thought that was Technological Racism from Last.fm.

Some people argued that streaming radio is expensive and it this should be a paid service. Of course! In fact, most sane people don’t have any problems paying some money provided everyone does it. As someone said, it would have been so much better to charge everyone €1.00 instead of selecting people based on place of birth. How the PR people of Last.fm came up with such a controversial idea and thought it was a good idea defies logic.

On the Last.fm blog, I proposed the following:

One hour ago, I starting receiving Twitter messages from friends telling me to have a look at an article on the BBC News website, Last.fm to charge for streaming, and that I would be surprised. I went there and, lo and behold, my proposition was there in the article. And as a bonus, I was presented as a blogger (blog poster?) and a Last.fm-contributing musician from Mauritius!

I’m sure Andy Warhol is smiling somewhere. I am having my 15 minutes of fame!

Will Last.fm come to its sense? I would be extatic as I love music!

Google G-Mauritius Day 9 in the news