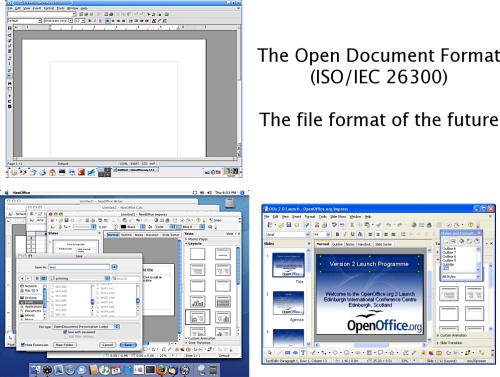 The standard was developed by a technical committee of the Organization for the Advancement of Structured Information Standards (OASIS) consortium and based upon the XML format originally created and implemented by the OpenOffice.org office suite. As well as an OASIS Standard, it is a published ISO and IEC International Standard, ISO/IEC 26300:2006“

There is even an ODF plugin for Microsoft Office.

Except Microsoft (of course).

Bill and friends submitted their own file format (devilishly called Office Open XML (OOXML) to confuse the layman) to ISO and, on the 4th of September 2007, OOXML was rejected by the ISO members:

“A ballot on whether to publish the draft standard ISO/IEC DIS 29500, Information technology â€“ Office Open XML file formats, as an International Standard by ISO (International Organization for Standardization) and IEC (International Electrotechnical Commission) has not achieved the required number of votes for approval.”

Here are the detailed results per country. Note that 2/3 of votes are required for something to become an ISO standard and OOXML had substantially less.

Here are the countries which voted against Microsoft’s proposal:

Beautiful! I guess Microsoft lobbied a lot but representatives of those countries rightly felt that they couldn’t tie themselves to one commercial company for ever. And if you look closely, you’ll see that we are talking about major major countries here.

These countries abstained i.e. they neither voted against nor voted for (Abstentions are counted as negative votes because the way the ballot is organized):

Notice Mauritius??? I am so proud that the intense lobbying didn’t work on us!

I believe a team of CS and IT guys and girls should start working on advocating ODF in Mauritius and about the best way to deploy the required software infrastructure so that the documents we all create (i.e. the wealth we generate day-in day-out) does not become unreadable in 10 years.

Let’s start changing our world for the better :-)

All my feeds are now in Atom 1.0 format