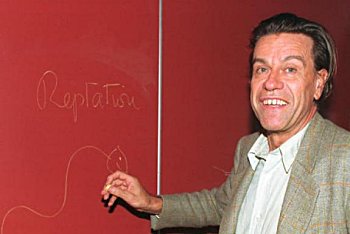 Pierre-Gilles de Gennes died four days ago. He was a French physicist and Nobel laureate.

His Nobel Prize was awarded for “discovering that methods developed for studying order phenomena in simple systems can be generalized to more complex forms of matter, in particular to liquid crystals and polymer”

When I was a student at the INSA de Lyon, he once came (I think it was in 1997) to explain precisely what this meant:

Yes. Pierre-Gilles de Gennes spent his time trying to understand what bubbles really were and how they were formed. He told us that it was important to know this, for example, in order to build safe factories for chemical products.

What impressed me most on that day was how passionate he was for his bubbles. And I guess he had an influence on me and that’s why I am so passionate for the things I like…