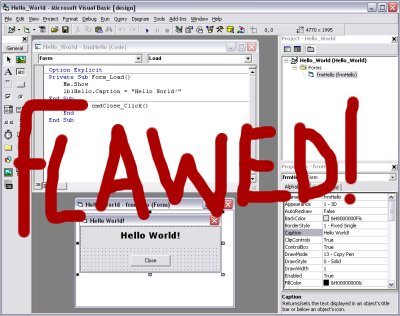 I’ve never understood people who think that Micro$oft Visual Basic is a good development environment. For me, VB is flawed. It is useless when one wants to write good quality code because the Basic language is too primitive (check the OO features for instance). And the GUI builder, while easy to use, only helps in producing non-compliant and, 9 times out of 10, plain ugly user interfaces. Sure, it’s nice to be able to prototype a small application in VB rapidly, but what you get is only a prototype and not commercial quality software.

And, this time, I have an ally. Alan Cooper, father of Visual Basic who, in his very interesting book The Inmates Are Running the Asylum says :

“Some software developers have arrived at the unfortunate conclusion that modern prototyping tools – like Visual Basic – are effective design tools. Rather than designing the product, they just whip out an extremely anemic version of it with a visual programming tool. This prototype typically becomes the foundation for the product. This trades away the robustness and life span of the product for an illusory benefit. You can get a better design with pencil and paper and a good methodology than you can with any amount of prototyping”

Should the Government promote open-source software?

Joining the ACM (instead of IEEE)