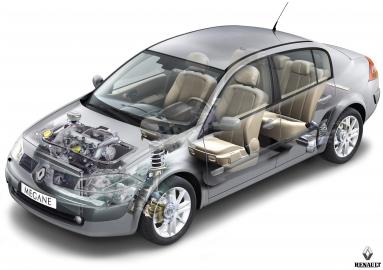 We’ve had our Renault Megane for 8 months now and it’s time for me to tell you what I feel about the car.

I am pretty much satisfied… :-)

The car looks very nice, has a pretty powerful engine (1.4 litres but 98 British horsepower), is very secure (with a total of 6 airbags which I don’t intend to test :-)) and is very comfortable. In fact, Christina and I have bought two car seats for Anya and Kyan and, frankly, I feel so happy driving with my wife next to me and my two kids securely fastened in the rear seats. It sure beats our previous car, a Toyota Corolla, which had deficient seats belts which precluded the use of car seats…

The engine is really smooth and the car is easy to drive (if you check the tyre pressure regularly). Fuel consumption is about 10 litres for 100 km (we tend to drive a lot in Quatre-Bornes and Reduit) which is about 31 miles per gallon for our still archaic friends. The car has an onboard computer giving (among other infomation) the instantaneous fuel consumption which helps a lot in choosing a correct driving technique.

The CD player is OK but not spectacular. I guess I should have opted for the optional Cabasse system instead… Well, next time then :-)

We’ve had one problem though that has still not been resolved. The light sensor which is used by the automatic headlights and automatic wipers subsystems is defective. We’ve sent the car at Leal for repairs (and the car is still under warranty) but they didn’t have the missing component in stock. They assured us they’ll order one from France for us and call us when it is available but they haven’t done so… yet… in spite of more than 2 months having passed :-(

I have to put some pressure on them. I’ll do that this week. Promise :-)

What is a heavy user?