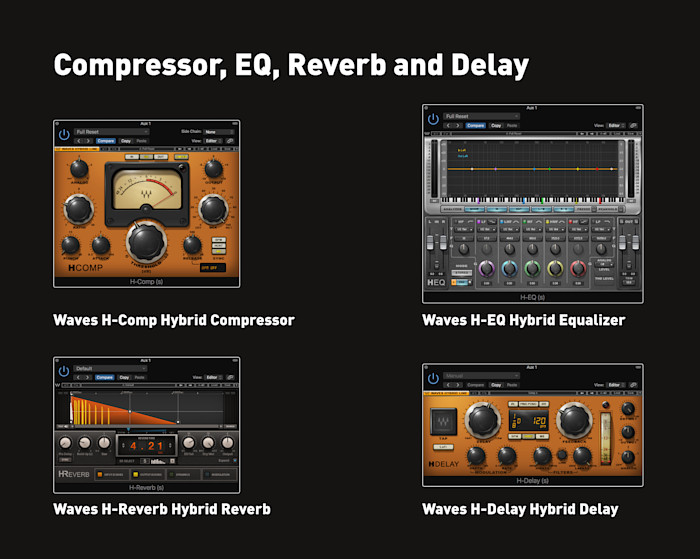 In my previous Bundles of Waves plugins post, I wrote that, even though I have tried a number of Waves audio plugins over the years, I have 9 favourites:

Unfortunately, buying them would cost me $2,131 which is waaaaayyyyy too expensive.

Fortunately, Waves regularly offer deals on its website. On 19 April 2017, I discover this incredible deal there. All prices are slashed: 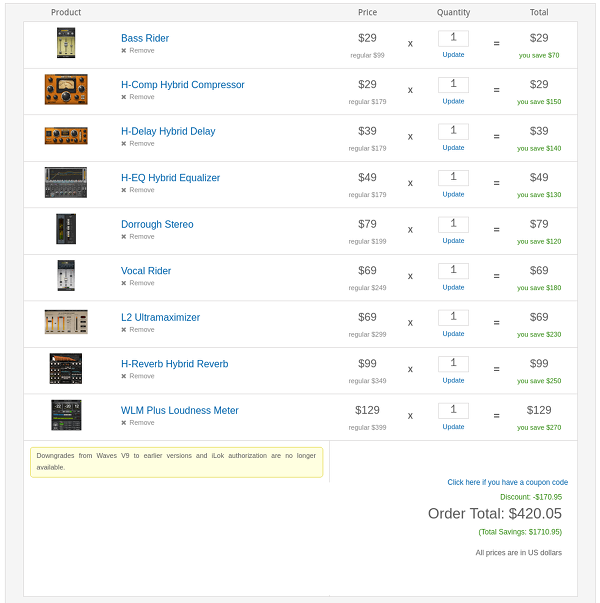 On 29 November 2017, I found out about the massive Cyber Monday Deal, still on Waves’ website: 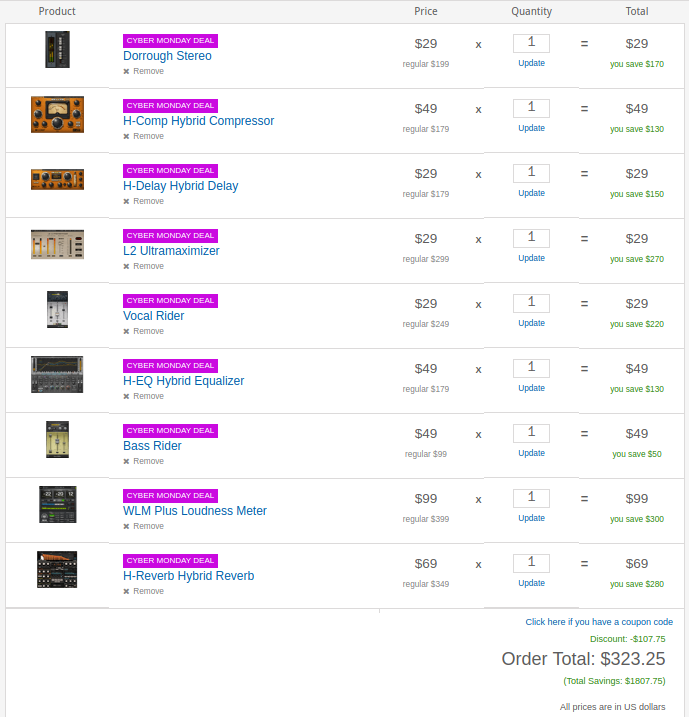 On 19 June 2018, I finally discover that a lot of people buy Waves plugins from Plugin Discounts which offers some of the best deals on the planet. I take the decision to always use such websites in the future and to only buy plugins if they are less or equal to $29 each. Here is what I finally bought today:

What remains now is the L2 Ultramaximizer which I use on my main bus to make sure that there is no clipping. Right now, I am quite far from making final mixes or mastering so I can wait a bit for the L2 to become available, either on Waves’ website or at Plugin Discounts, at $29. Right now, it is available at $69 which is too much.

As for Vocal and Bass Rider, I can wait as I am not recording vocals or bass these days. Only electronic sounds, baby ;-)

On 28 Jun 2018, I got Vocal Rider at $29 on Waves’ website. It was slightly cheaper on Plugin Discounts but, for some reason, my credit card was not working there.

On 04 Jul 2018, I got Bass Rider and the SSL G-Master Buss Compressor (which I didn’t intend to buy but which is excellent to glue a mix) on Waves’ website. Each cost $29 but with the Waves discount for the 2nd plugin it was more like $25.38 each.

On 11 Jul 2018 after reading a lot, I bought Waves Tune at $24.36 on Plugin Discounts. I have used it only once since to tune Anya’s and Kyan’s voices while they were singing Where’s the Revolution by Depeche Mode and it is a fantastic plugin. It is transparent and makes voices twice better.

On 16 Jul 2018, I got the Vitamin Sonic Enhancer and took the plunge for the Scheps Omni Channel. Both costs $29 but more like $25.38 with the discount on Waves’ website. I had no intention to get a channel strip. After all, I already own a compressor and an EQ. But I only had to use the Omni Channel once to realise how good it was. I used it to tame a bassline (albeit with Bass Rider before it) and the resulting sound was amazingly good. The only plugin I intend to buy now is the L2 Ultramaximizer.

Am I? Two days later, on 28 Jul 2018, I got the F6 Floating-Band Dynamic EQ on Waves website at $21.75. A dynamic EQ is an EQ where cut or boost are made only if a signal crosses a certain threshold. One example of use is when trying to EQ a harsh cymbal. If a normal EQ is used, then high frequencies will be cut throughout. With a dynamic EQ, the cut will be made when the cymbal is really loud (and this happens only momentarily). A dynamic EQ is similar to a multiband compressor but it is much easier to use. That’s why I didn’t get a C6…

On 28 Oct 2018, I took the plunge and got Brauer Motion, a circular stereo auto-panner designed with Michael Brauer who mixes Coldplay. It cost $26.91. It’s a fun plugin which makes sounds move in space. I intend to use it on some sounds from the past (sampled from my Kawai K4 maybe) which lack movement.

On 24 Nov 2018, Waves gave me Sibilance for free. It’s a vocal de-esser with excellent quality.

On 21 Jun 2019, I purchased Bass Fingers, a virtual instrument emulating a bass guitar being played with the finger (instead of being slapped). Cost me $24.50 and it’s fantastic to lay down authentic and realistic-sounding basslines. I could never play a bass guitar but, with Bass Fingers, I can try being one with my master keyboard.

On 30 Nov 2019, I got Berzerk Distortion for free and it’s dope. With it, I can have wild, deranged, creative distortion. To be honest, I am not much of a distortion guy but, when needed, it sure comes handy.

On 09 Dec 2019, I upgraded my Dorrough Stereo to Dorrough Surround (which includes Dorrough Stereo) for free. Having more plugins without having to pay is nice, even though I can’t see myself mixing in surround soon. I’m still struggling in stereo.

On 2 April 2020, thanks to the fact that I already owned the SSL G-Master Buss Compressor, Waves allowed me to upgrade to the SSL 4000 Collection bundle for just $74. This means that I now own the SSL E-Channel, the SSL G-Channel and the SSL G-Equalizer as well. All of them are plugins which have earned rave reviews for nearly perfectly emulating a real SSL 4000 console (which, in addition to costing an arm and a leg, is used by the very best including Chris Lord-Alge).

On 9 April 2020, I bought the LoAir subharmonic generator plugin (it has two adjustable low-frequency processors for shaping the ultra-low end) and the J37 tape saturation plugin (which emulates the very machine used to record many of the greatest masterpieces in modern music at Abbey Road Studios). I became eligible for one free plugin and I opted for the API 550A and API 550B EQ. The idea was for me to be able to use the CLA compressors together with the API EQs and get a kind of vintage channel strip.

On 15 July 2020, I bought the JJP Analog Legends bundle which came with Vari-Mu compressors based on the world famous Fairchild 660 (mono) and 670 (stereo), namely the PuigChild 660 Compressor and the PuigChild 670 Compressor. The bundle also features emulations of two legendary Pultec EQs in the form of the PuigTec EQP-1A EQ (for low and high frequencies) and the PuigTec MEQ-5 EQ (more suited for mid frequencies e.g. vocals). All these plugins essentially colour the signal. This allowed me to choose a free plugin and I opted for the NLS Non-Linear Summer which, in essence, allows me to emulate real analog consoles within my DAW.

On 15 September 2020, I took the plunge and bought the Scheps 73 pre-amp/EQ and the API 2500 compressor. The Scheps 73 models the famous Neve 1073 so favoured by producers. It is generally used when tracking (i.e. recording) and I intend to use it to record vocals, guitars and, yes, the Mauritian ravanne. This will change my workflow as I tend to record dry but I want to try. The API 2500 is a VCA compressor which is world famous for its versatility. I got it because I want to understand the API philosophy. Interestingly, because of these two purchases, I could choose a plugin for free and I got the API 560 10-Band graphic equalizer. With the API 550 I already had, my API collection is complete.

On 21 September 2020, I got OneKnob Wetter for free from Waves. It’s a reverb plugin with only one knob (hence the name!)

On 6 October 2020, I got OneKnob Phatter for free from Waves. It’s an EQ for bass with only one knob (hence the name!)

On 7 October 2020, I took the plunge and got Reel ADT. As explained by Waves themselves: “is the first plugin to successfully emulate Abbey Road Studios’ pioneering process of Artificial Double Tracking. The effect that would become an integral part of Abbey Road’s signature sound was initially created at the famed studios in the 1960s to meet the needs of some very special clients: The Beatles.” On the same day, I used Real ADT to do a new mix of Anya and Kyan singing Where’s The Revolution by Depeche Mode and I (and they) liked the result. Pity that they have not given me the “right” to put the mix online…

On 01 Nov 2020, I obtained the IR-L Convolution Reverb for free and I found out that Waves gives a 4.8Gb convolution reverb library for free. I downloaded it and, lo and behold, it’s amazing.

On 03 May 2021, I obtained the Codex Wavetable Synth for free courtesy of Beat Magazin from Germany. My synth background is digital (think Roland D-50 or the Kawai K4) and, of course, analog (think the Roland Jupiter-8 or the Roland Juno-106) and wavetable synthesis is something I find quite intriguing. Of course, I know that Xfer Records Serum is considered to be the best but, having spent some time with Codex, I have to say that I am quite impressed. The fact that it is so easy to import samples in it makes it even more impressive. I love adding colour to my sound palette.

On 18 May 2021, I purchased the Flow Motion FM Synth as I wanted to add modern FM synthesis to my palette. I already had Dexed, the free DX7 emulator but I wanted something more for the 2020s. I also purchased the VU Meter as I am always keen on having good metering. And, as a result of these two purchases, I selected the three MDMX Distortion Modules for free and, as I already own Berzerk, I also get MultiMod Rack for free.

Finally, on 12 September 2021, I decided to get the Waves Update Plan for all my Waves plugins still in Version 10 and 11. I needed to have all of the plugins in Version 12 (12.7 to be more precise) so that they work on the new M1 Mac mini I have just purchased. Fortunately, there was a nice sale going on and I managed to grab Bass Slapper, Infected Mushroom Pusher, Kaleidoscopes, MetaFilter and S1 Stereo Imager for free. The idea, apart from the Bass Slapper, is to have effect plugins to get really creative (and modern) during the mixing process. I really need to learn how to use all of them, including the ones I had before such as Berzerk Distortion, Brauer Motion, MDMX Distortion Modules, MultiMod Rack, etc.

I’m delighted with my Waves collection.

Of course, I am not stupid and I know that there is a difference between a (relatively inexpensive) software and the real hardware but the idea is not to recreate, ahem, reality but to understand how professional musicians and producers work with iconic equipment.

I really want to understand.

The Focusrite 2i2 audio interface and its free plugins

Ruby on Rails is a Big Thing...