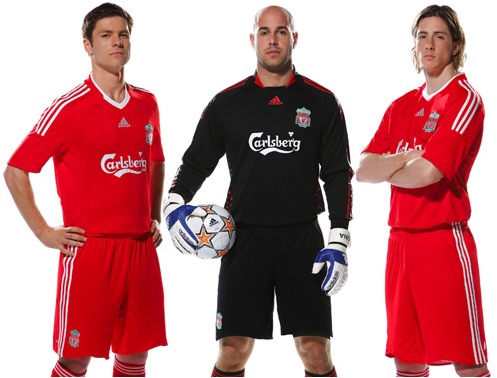 Today is, for me, the most important football match of the whole season: Liverpool against Manchester United at Anfield!

So it seems the odds are against Liverpool winning today. Five defeats and one draw in the last six years do not look too good.

Reading the match reports reveal the main reason behind this run of defeats: terrible defensive mistakes which Manchester United players were quick to capitalise on. In 2002-2003, the match was even until “[Diego Forlans]’s 65th-minute opener came after an abysmal mistake by Jerzy Dudek in the Liverpool goal.” In 2003-2004, “[Ryan] Giggs’ wicked left-foot cross evaded [Ruud] Van Nistelrooy, but also deceived the diving [Jerzy] Dudek and flew into the far corner.” In 2004-2005, “[Jerzy] Dudek allowed Wayne Rooney’s tame 25-yard shot to slide in after 22 minutes to gift the former Everton striker a goal in front of The Kop.” In 2006-2007, “substitute [John] O’Shea pounced after Liverpool keeper Pepe Reina fumbled Cristiano Ronaldo’s free-kick.” Last year, “[Carlos] Tevez was lurking to turn in Wayne Rooney’s driven shot from a Ryan Giggs corner three minutes before half-time.”

Three mistakes by Jerzy Dudek. One by Pepe Reina. And, last year, a goal from an unmarked player during a corner kick.

Apart from those dreadful moments, the matches have been fairly even as can be seen in the one goal differences. Liverpool was unlucky at least once or twice in the sense that they dominated the game but lost because of one terrible mistake. But losing is losing. Manchester United has won five times during the past six years and this is a fact.

So why do I think that Liverpool will win today?

At least for two reasons. First, I am a Liverpool fan and I can’t be rational today. Manchester United is THE enemy and every single drop of blood in me wants Liverpool to win. Call it blindness. I call it passion.

The second reason is that Rafael Benitez knows that Liverpool’s failure to win over Manchester United at Anfield was mostly because of defensive errors. I’m sure he has worked on that part a lot with the players. Liverpool has an excellent defense and, with Javier Mascherano, a world-class defensive midfielder. Defense also starts from the front and Fernando Torres, Robbie Keane, Xabi Alonso and Steven Gerrard have enormous work rates. I’m, of course, assuming that Fernando Torres and Steven Gerrard are starting today but they are our two best players and can be rested later…

My prediction for today’s match is 2-0 for Liverpool.

The beauty of the match was that both Steven Gerrard and Fernando Torres started on the bench. Liverpool managed to completely outplay Manchester United during the second half. Once more, Robbie Keane failed to score but he worked a lot. I was impressed with Albert Riera. He was first-class today and his dribbling mesmerized the Manchester United defenders. His crossing and physical presence were also very good.

I watched the match with my father (who is a die-hard Manchester United fan) and I was telling him that the big difference between Liverpool and Manchester United was the price Liverpool could buy players. For instance, the $9m Dirk Kuyt has a bad first touch compared to the $31m Dimitar Berbatov but the only way to mitigate that is to buy more expensive players…

The best thing that can happen now (following the massive influx in money at Manchester United, Chelsea and Manchester City) would be that Sheikh Mohammed bin Rashid Al Maktoum, Prime Minister and Vice President of the United Arab Emirates and ruler of Dubai, finally buys Liverpool and injects the cash which is needed to compete at the very top every season. One of the joys of being jobless (for the time being at least…) is that I have ample time to walk, jog and ride my bicycle.

Yesterday I dropped the kids at school and jogged back home. This took me about 15-20 minutes. It was tough as I had not jogged for months… I then took my bicycle and spent the next two hours cycling (Quatre-Bornes to Roches-Brunes to Beau-Bassin to Rose-Hill and back to Quatre-Bornes.) This was an exhilarating experience as I could feel muscles that I thought had completely atrophied. Before you ask, yes, every single of my muscles is aching today :-)

After writing this, I’ll have a light lunch (no fried or boiled noodles today!) with Christina and do a bit of cycling in the vicinity of Quatre-Bornes. If I manage to exercise everyday then I’m sure that I’ll become much fitter… and, maybe, thinner. 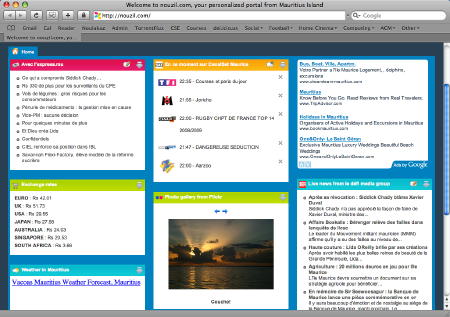 One impressive aspect of this mashup is the fact that it offers a pretty slick Ajax user interface (for a 1.0 product) and this is a direct consequence of it being powered by the Yahoo! User Interface library:

The Yahoo! User Interface (YUI) Library is a set of utilities and controls, written in JavaScript, for building richly interactive web applications using techniques such as DOM scripting, DHTML and AJAX. The YUI Library also includes several core CSS resources. All components in the YUI Library have been released as open source under a BSD license and are free for all uses.

I know there are a lot of people who discount Javascript as a powerful programming language. I guess they should read David Flanagan’s excellent book:

A nugget of wisdom on how to be successful in life