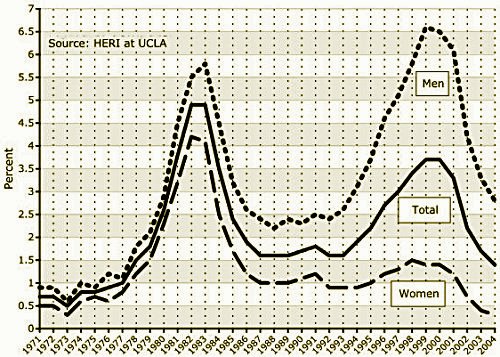 An analysis of survey results from the Higher Education Research Institute at the University of California at Los Angeles (HERI/UCLA) indicates that the popularity of computer science (CS) as a major among incoming [first year students] at all undergraduate institutions has dropped significantly in the past four years.

The survey was made in 2005 and the Higher Education Research Institute people only looked at US universities. Nevertheless, I think that this trend is general and is relatively easy to understand.

The first peak, which happened around 1983, was when the microcomputer became pervasive. Suddenly, computers were affordable and many people could finally afford to buy one. This was the era of the Sinclair ZX Spectrum and the Commodore 64. Geeks could finally opt to join a department full of other geeks :-)

The second peak, which happened around 2000, was when Internet came together with its bubble. Lots of youngsters chose CS as they wanted to create the new IBMs and Microsofts. They wanted to emulate Google and Yahoo! and they thought this was easy.

The decline from 2000 onwards was when people found out that emulating Google and Yahoo! was not easy. Sure, they loved to browse the web but they could not build a successful company. And the whole Western economy nearly crashed!

The situation in Mauritius

According to my observations, we had a peak a few years ago when people started talking about the Cyberisland concept. Lots of youngsters chose CS because they dreamed of working in the Cybertower to get a lot of money. This is when lots of centers offering “computer” courses appeared out of nowhere…

Since then, I have notice a decline. Many youngsters have realized that one needs the correct aptitudes to succeed in CS. If someone does not have those aptitudes, then it’s much better for that person to choose something else where he/she has a much higher probability of succeeding. They have also found out that things are not that rosy in the Cybertower…

This is a good thing in my opinion.

Libreoffice with Flatpak: Adding dictionaries for other languages